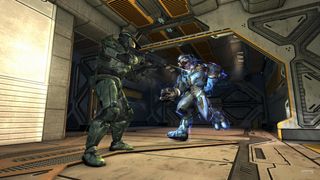 343 Industries is planning to start the first public test for Halo: Combat Evolved Anniversary next month, according to an update on the forums. Testing, or 'flighting',  for the next addition to Halo: The Master Chief Collection was previously planned for January, but it looks like only 343's external partners will be getting a shot this month, while everyone else will need to wait just a little bit longer.

The first test will be a broad one, covering various systems and modes. 343 wants to put dedicated servers, crossplay and the new UI through its paces, letting testers get their hands on the singleplayer and co-op campaign, multiplayer, customisation and progression.

While it looks like there will be a lot to test, players won't be able to run wild. If you get in, you'll have limited access to certain areas, much like last year's tests for Halo Reach. Combat Evolved is a slightly less exciting prospect, but only because it's one of the few entries in the series that we've actually been able to play on PC. This will be the first time we've been able to play 2011's Anniversary edition, though.

If you already tested Halo Reach, you should already be set up. Prospective testers will need to sign up to the Halo Insider programme, opt in for the tests and to be contacted by 343 Industries, and provide a DXDIAG by uploading one to your profile. If you don't get into the first test, you'll likely have other chances later.

There's no release date yet, but the plan is still to get the entire collection out on PC in 2020.