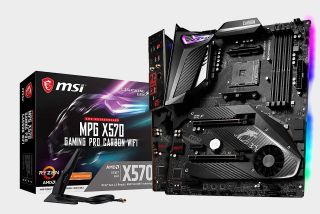 You won't often see us write up deals on motherboards, because honestly there aren't many around that are worth your time. But this MSI MPG X570 is currently sitting at it's lowest price ever at £199 on Amazon. That's a saving of nearly £50 on our favourite AMD motherboard, so if the new decade has prompted you to get around to building your dream PC, this may be exactly what you're looking for.

If you already have one of AMD's latest generation Ryzen 3000 series processors (Zen 2), you're all set or if not, you can rest assured that the X570 chipset will support Ryzen's 2nd and 3rd generation tech. This motherboard also boasts four DIMM slots that can handle speeds up to 4400MHz, and two M.2 slots, allowing you to use speedy PCIe 4.0 SSDs—and it's the only consumer chipset to support PCI Express 4.0.

The rear I/O panel features seven USB-A ports for peripherals, as well as a single USB-C port for connectivity and high-speed data transfer. There are also headers for the included wireless antenna to help with wireless connectivity, as well as a gigabit Ethernet port.

The specs of this motherboard mean you'll be able to use the best components on the market. If you were planning on going with a budget build, this mobo may be a bit overkill, but if you want to leave room for future upgrades, then this is still a solid option.

MSI MPG X570 Gaming Pro Carbon WiFi | £199 (save £70)
With four DIMM slots with speeds up to 4400Mhz and two M.2 slots sporting PCIe 4.0, this motherboard can make the most out of the best components. View Deal

If you want to see how this motherboard compares to others, you can check out our list of the best gaming motherboards as well as the best AMD motherboards.