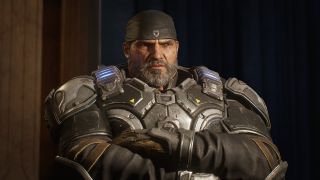 Gears 5 will feature the biggest single player campaign in the series' long history, including one map The Coalition says is fifty times larger than any previous Gears of War level. That's accordiong to Coalition studio head Rod Fergusson, who provided a ton of new Gears 5 details during a PAX panel in Seattle Saturday.

Fergusson discussed a bevy of new features coming to Gears 5, including Jack, a companion bot who floats around and provides various benefits that you'll unlock over the course of the campaign. Jack can cloak players, and Fergusson says that plays into one of the design goals The Coalition has for Gears 5: allowing players to initiate combat when they want, rather than the traditional Gears campaign experience of stumbling headlong into firefight after firefight.

The ability to control the pace of the game, and choosing whether to fight or explore, is also embodied by the Skiff, which will be your transportation through Gears 5's campaign. From the Skiff you'll be able to take on side missions, choose weapon loadouts, find new points of interest and collectibles, and install upgrades for Jack.

The basic idea, according to Fergusson, is to give players more choice about what they're doing at any given time during the campaign.

During the conversation with Microsoft's Larry "Major Nelson" Hryb, Fergusson provided plenty more details on Gears 5, which comes out September 10 (although you can play four days early if you have an Xbox Game Pass Ultimate subscription). You can watch the whole panel on Twitch—Major Nelson Radio Live begins at the 3:30:25 mark.