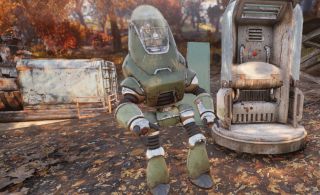 As Fraser pointed out yesterday, many Fallout 76 players are unhappy with two new items for sale in the Atomic Shop: a refrigerator that slows down the decomposition of food and a robot that collects junk for you. They cost 700 and 500 Atoms respectively, and while Atoms can be earned by completing challenges they can also be purchased with real money. If you decided to buy both items, it'd cost you around $15 for the new additions if you don't already have some earned Atoms handy.

Most of the player complaints stem from the fact that Bethesda originally stated the Atomic Shop would only contain cosmetic items, and the fridge and scrap bot (along with repair kits and scrap kits added to the Shop earlier in the year) aren't cosmetics, they have an effect in the game world. (Though I just bought the scrap bot myself, and I can confidently state it is practically a cosmetic item because it barely collects anything. I can collect more scrap in two minutes than it can in an hour.)

But others have noted it appears the collectron robot was originally intended as a base game item, not something you'd need to spend Atoms to unlock. On Reddit, user alfiearmadillo pointed out that you can spot the collectron—or at least the little housing unit he waddles back and forth to on his junk-collecting patrols—in the official Fallout 76 camp trailer back in June of 2018. Here's a screenshot:

Granted, it's just the robot's little house that's shown, and you don't see the collectron itself lurching around while talking excitedly about finding used toilet paper and aluminum foil. At the time the trailer was made, it may have simply been a decoration of some sort, or the robot may not have been finished.

However, someone named spaceleviathan on imgur posted these images from what appears to be the mobile version of the Fallout 76 Prima guide, published in November of 2018, which doesn't name the collectron but makes mention of a 'scavenging station' with 'Protectron types' that can forage for you. And again, there's a picture of the collectron housing station.

I just bought a $9 Kindle copy of the Prima guide from Amazon myself (this is turning into an expensive day), and I can confirm, it's in there as a craftable item alongside a mention of resource extractors, which you can also place at your camp and are part of the base game. Have a look:

So, it looks like the collectron was intended to be a part of Fallout 76 from the start rather than an Atomic Shop item. While I feel a lot of the backlash over these minimally useful Atomic Shop items are a bit overblown, it does pretty much suck to have a feature of a game cut from the original release and then sold as an add-on later, even when it's possible to earn enough microtransaction currency in-game to afford it.