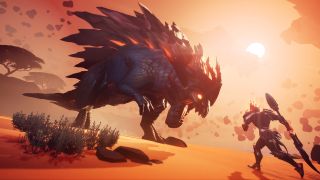 The Monster Hunter-ish co-op action game Dauntless will go into full release on May 21, a big moment that will be accompanied by the launch of Hunt Pass Season 5: Hidden Blades. Developer Phoenix Labs said that the latest Hunt Pass "transforms the world of Dauntless into a Moon Blossom Festival," with 50 levels of content on basic (free) and Elite (about $10) tracks offering new cosmetics and premium currency rewards.

(If it seems a little odd to go into season five at launch, remember that Dauntless will have been in open beta for almost exactly a year when it happens. The first Hunt Pass went live in December 2018 and they've been rolling regularly ever since. This is probably also a good time to catch up on our analysis of why game release dates aren't quite as cut-and-dried as they used to be.)

The release version of Dauntless will feature "numerous new improvements and content updates" that recently appeared in the open beta, which makes sense, and the Mastery system, with its own achievements and rewards to pursue. There will also be a "massive campaign rework," with big changes to questing, crafting, character interactions, and the addition of a new "End of Hunt" screen that will break down information including Mastery card progress, quest rewards, and Behemoth break parts earned.

Dauntless first attracted attention in late 2016 because it sounded a lot like Monster Hunter, and Monster Hunter: World hadn't even been confirmed for PC at that point. But it very quickly established itself as an excellent game in its own right: We called it "the PC Monster Hunter game we've all been waiting for" in an early hands-on and last year Steven called it "a classic Monster Hunter clone" with fun multiplayer hunts that more than made up for the rough edges of its early access release.

To help newcomers get up to speed, Phoenix Labs will also release a new Arcslayer pack at launch that will include a new "mech-inspired" armor set, premium currency, and consumables. A price for that hasn't been set yet. Dauntless on PC (it's also coming to PS4 and Xbox One) will be available via the Epic Games Store.