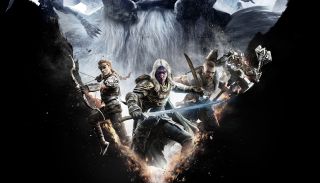 (Image credit: Wizards of the Coast)

Baldur's Gate isn't the only D&D setting being revisited soon. The previously console-exclusive action-RPG Dark Alliance is also returning, and this time the party—which now includes D&D celebrity Drizzt Do'Urden—is hanging out in the chilly, barbarian-infested land of Icewind Dale, trying to keep the frost giant population down.

The original Baldur's Gate: Dark Alliance launched on consoles soon after Baldur's Gate 2 concluded with Throne of Bhaal, but aside from sharing the same setting it was an entirely different kind of fantasy romp. It was a 3D hack-and-slash affair with three classes, couch co-op and a linear, rollicking campaign that left countless dead monsters in its wake.

Next year's Dark Alliance, the third game in the series, drops Baldur's Gate from the title and takes the action north. Icewind Dale was the setting of a pair of great Infinity Engine RPGs, but it's also famously the stomping grounds of the rebellious Drow hero, Drizzt Do'Urden, originally created by prolific fantasy author R.A. Salvatore. You'll be playing him, along with his pals, Catti-Brie, Bruenor and Wulfgar.

Drizzt and his buds' adventures have spanned several series, starting with The Crystal Shard, but Dark Alliance is a standalone romp. "It's a new, unique adventure inspired by the characters, but it is set in and around the events of The Crystal Shard," says Jeff Hattem, head of Tuque Studio. "But some of the elements of the story will be familiar to fans of the franchise."

Tuque started work on the game at the beginning of 2017. Hattem, who got into gaming through D&D, specifically as his group's dungeon master, had wanted to tell a new story in Icewind Dale for a long time, so he approached Wizards of the Coast to explore a collaboration. "It took us a while to prove we had what it took to make a great game," he says, "and now we're working together on an amazing game."

All four adventurers will be playable together in co-op, both online and offline with split-screen. It's been convenient for Tuque to have such well-defined characters who have not only been developed across a multitude of books, but also already comfortably fit into RPG classes and playstyles. The studio doesn't want to be strict about the class definitions of these characters, however, because they evolved over time—Drizzt started out as a Fighter before becoming a Ranger— and it wants players to have a similar experience.

The adventuring quartet still fall into familiar archetypes, however. "Drizzt is very dashy, quick and agile," says Hattem. "Wulfgar is the basher—he's a seven-foot-tall, strong barbarian. Cattie-Brie is more of a ranged character, where she has a wide range of different abilities that she can use from a distance, and she's super athletic. And there's Bruenor, the father figure of the group and the protector; using gaming terminology, he's the tank."

Icewind Dale is a harsh place, which is why you need mates with you. Bold adventurers will be able to strike out alone, but Hattem warns that it will be extremely difficult, suggesting it might be a fun challenge for someone looking to ramp up the difficulty. You won't get AI companions, either, so you'll be missing out on the party banter. To make grouping easier, everyone will be able to play together and bring their own characters into another player's game, regardless of where they are in the story. Character progression is persistent, though there's no word on whether or not that extends across platforms.

Dark Alliance has a hub-and-spoke design where the heroes will hang out in a central location where they can pick up quests and go off on side adventures. There's a main quest to follow, though it's still a mystery, and you won't have complete freedom over your path, but you'll still have options for how you progress.

This also goes for building your character, picking skills and gear, and creating different loadouts. The exact skills and abilities that will be making their way over from the tabletop game aren't ready to be revealed yet, unfortunately. There will be a degree of self-expression, however, from the choices you make when you level up, to the appearance of your gear, which is cosmetic as well as practical.

This is how Dark Alliance approaches roleplaying, rather than through lots of dialogue choices and story-based character development. There's still some exploration and downtime, but the main focus of the game is action. Specifically, chopping up monsters, some of them iconic, like the frost giants, and others possibly new.

"D&D is super fun and it offers lots of different ways to please different kinds of players," says Hattem. "Our game is the part when the DM says 'roll initiative,' and that's when you get going."