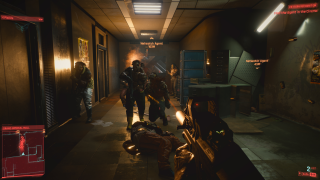 Update: Marcin Momot, CD Projekt Red's global community lead, has commented on the apparent shift to first-person cutscenes. As he wrote on Twitter, "the decision made by the team to go 100% first person in @CyberpunkGame is something that will benefit it greatly from gameplay and story-telling perspectives. That said, players will still be able to see their characters in the inventory screen, during driving sequences, in mirrors and, very occasionally, in some of the cut-scenes."

That "very occasionally" could be interpreted in different ways. In the early demos there were the third-person scenes like the one in which V rode an elevator, get out of bed, and took a phonecall, but new footage seen in the most recent deep dive only leaves first-person during driving and menus, like the character creation screen in which Johnny Silverhand comments, "Come on. Really think they give a rat's dick how you look?"

2/2 That said, players will still be able to see their characters in the inventory screen, during driving sequences, in mirrors and, very occasionally, in some of the cut-scenes.September 2, 2019

Original story: After The Witcher games let us see Geralt in third-person, whether riding horses or relaxing in the tub, many were surprised by Cyberpunk 2077's first-person perspective. Early footage showed cutscenes in third-person though, with personalized versions of V in various cool jackets. That's apparently changed, however.

After a German interview with Night City Life was picked over on the CD Projekt Red forums (with some interesting details about how rooms in The Witcher 3 had to be designed with extra space so Geralt didn't bump into a table before the camera had time to follow him in), a user approached the official Cyberpunk 2077 Twitter account to ask whether cutscenes would be in first-person. "In Cyberpunk 2077, immersion is very important to us," came the reply, "so yes, cutscenes are fpp".

"And what about sex scenes?" asked the persistent fan. "Same".

In the footage released so far we've seen a third-person option for driving, as well as moments when V is seen through a security camera, cyberoptics, and mirrors, but it seems like we won't be able to see our customized V elsewhere.