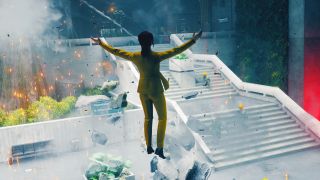 My first few hours in Control were... embarrassing. I was seriously struggling with the combat—particularly an early boss, Tomassi, who floats around pelting you with chunks of scenery. For whatever reason, I just couldn't get into the distinctive rhythm of its firefights, which encourage you to move constantly to avoid being overwhelmed by enemies. And it didn't help that the only weapon I had was a pistol and a weak telekinesis attack. I felt pathetic, underpowered, scared of what fresh horror was around the next corner.

Fifteen hours later, it's a different story. Now I actually relish the moment when I see those telltale flickers of red light, which herald the arrival of a group of enemies. No longer pinned to the ground, wincing as I fire my little peashooter, I soar majestically into the air in my golden business suit. I shred through armour and shields with Pierce—a powerful weapon form that reminds me of the railgun from Quake 2 in the best possible way. I yank chunks of concrete from the walls, raining down fury from above, wiping out groups of Hiss in one fell swoop. I am become death, the destroyer of worlds!

This type of player progression is nothing new in videogames, of course. It's as old as the medium itself, from grabbing a mushroom in Mario to gaining a level in Final Fantasy. All I'm saying is, Control does it really well. For one, you never feel overloaded with new powers and weapons. They're doled out at a reasonably relaxed pace, which makes the discovery of a new one all the more exciting. Too many games are overeager when it comes to handing out new toys, scared you'll get bored. But Control knows when to hold back.

Then there's the way new powers and upgrades alter the flow of the game. Levitate is the most dramatic, letting you leap high into the air and float for a while. This transforms all those big, vertical sections of the Oldest House into thrilling three-dimensional battlegrounds. And now you can fly straight to certain locations rather than making your way there via elevators and corridors, as you were forced to before. Unlocking the Levitate power completely changes your relationship with the environment, and suddenly exploring and fighting feel brand new again. You wonder how you ever lived without it.

This feeling of power—of growing stronger, rising to the top of the Oldest House's weird food chain—is manifested in smaller, simpler ways too. Jesse's ability to throw stuff with telekinesis is unlocked early on; but when you fully upgrade it, which adds an extra 75 percent of damage, it really comes into its own. I rarely use my guns now, instead choosing to hurl gas canisters, chunks of concrete, and furniture at enemies. Watching a chair slam into a Hiss that I previously struggled with, killing them instantly, is an incredible feeling. And increasing the base damage of the already formidable Pierce form of the Service Weapon makes you feel like you're toting a cannon around with you.

But really it's about, well, control. When Jesse first enters the Oldest House—and, by extension, the player—there's something immensely sinister and oppressive about the place. You're never quite sure what it's going to throw at you next. But as your powers and confidence grow, you slowly start to take back control. You no longer go into a combat encounter on the back foot; now YOU set the rules of engagement. This surreal, imaginative setting never stops being weird, but over time you begin to feel like a part of it—rather than an outsider hopelessly lost in it—which is hugely empowering. Other games evoke a similar feeling, but very few do it as well, or with as much style, as Control.