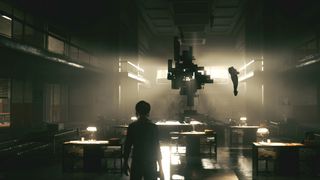 Where is Black Rock Processing in Control? Remedy's adventure is a bewitching, bewildering time. As such, it’s pretty easy to get lost amid the corridors of its gravity-defying Oldest House. Around three or fours hours in, you’re directed to Black Rock Processing during the 'Threshold' mission, and it proves one of the hardest areas to reach. With our help, though, you’ll get there without too much trouble.

The most direct route is to travel from the NSC Power Plant. If you’re reading this and are at another control point, simply fast travel back to this central hub. After the main Central Executive area, it’s one of the easiest checkpoints from which to travel.

How to get to Black Rock Processing in Control

Once you’re at the plant, sprint around the perimeter of the domed area until you spot a door labelled ‘Central Maintenance’. Most likely you’ll have to take some guards out en route, so make sure you’re prepared to kick all the ass with Jesse’s Service Weapon.

After throwing a bunch of floating debris at the Hiss, you’re confronted with a brightly-lit room with a ‘Field Training’ sign on the left, and a ‘Black Rock Processing’ sign on the right. We’ll give you two guesses which option you need to choose.

After you’ve passed through the appropriate door, you have to do a little telekinetic puzzle solving. Your destination lies a few floors above and, to get there, you must levitate several power blocks into the appropriate turbine slots to stop the massive, murdery blades from spinning.

There are three power slots that need filling, though none of the required turbines are particularly hard to spot. After you’ve given each one the appropriate amount of juice, the blades will stop and you’re free to jump over to the other side in safety.

Once you climb to the top floor, look for a small balcony with a light switch. Just like before, yanking on this three times whisks Faden away to the Oceanview Motel. On this occasion, the trick to getting out of the Twin Peaks-esque establishment involves ensuring certain furniture and items are laying in the same position in the boxy hotel’s rooms.

After you run to the front desk and ring the bell, the motel’s first room on the left down the corridor will open. It’s now time to perform some Simon Says detective work. Look closely at the positioning of the objects in this first room.

The key is to observe the positioning of certain objects. As you’ll soon find out, the next room down the corridor is identical, and it’s your job to move the pieces of furniture in the second room to match the first. Here's the correct order:

After you’ve made the items in the first two rooms sync up, the third room down the hall opens. Go inside and you’ll find a key that opens a room on the opposite corridor of the motel. Enter this room with the key and pull on the shade three times to be transported back to the main facility.

From here drop back through the turbines and retrace your steps until you reach a massive stone door that now  opens slowly. Continue down the almost pitch-black cavern with serious X-Men vibes and several other doors will unhinge to let you into Black Rock Processing.

Follow the signs for Black Rock Processing from here to find your destination. Happy Hiss slaughtering!