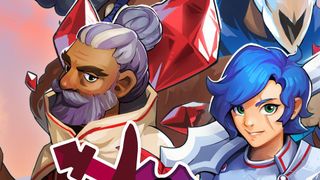 I’m playing Wargroove in co-op, but it wouldn’t be true to say my friend is too. He’s actually playing Picross, on his phone, to pass the time. And I can’t blame him.

The plan was to empty the coffers of a castle in a daring raid. Since I’d picked Wulfar, a gruff Scottish man with a turquoise beard and an enormous stone hammer slung over his shoulder, I would launch the decoy assault on the western gate.

My friend, controlling a pair of Brothers Grimm-esque children, would lead a strike team in the north, smashing through less-guarded doors to the treasure room. He’d scoop up all the gold in a big bag marked SWAG and escape to the harbour, while I retreated to my air balloon. What? Every prince of thieves owns an air balloon.

That’s exactly how events unfolded, up to a point: my waves of knights and pikemen crashed against the keep’s front door, funded by gold from the villages I plundered along the path. Meanwhile, the Shining kids made a successful incision into the keep from above, dispatching defenders as they went.

But then, as so often happens in Wargroove, the match stopped moving. Our forces met resistance of equal strength, and the race became to establish an economic advantage that would allow one side to slowly overwhelm the other with new units. The trouble was—and Karl Marx did warn us about this—only I had access to the means of production. My co-op partner was given no way to build new units, and so despite the healing of wizards, his numbers dwindled to almost nothing. This turned out to be not so much tragic as tedious: while I enacted a thrilling turnaround, felling giants with trebuchets, he checked in every five minutes to move his two remaining soldiers slightly closer to their objective.

I’m loathe to put all the blame on Double Trouble, the free new Wargroove DLC designed for two players. Rather it’s a problem that plagues an entire genre. For while co-op at large has become more convenient than ever, turn-based tactics has remained resolutely unsociable.

In the last decade, action game developers have come to understand that some moments simply aren’t meant for co-op. Respeccing your character should be a matter of solitary contemplation. Rearranging your inventory at length mid-adventure is a little like inviting a friend over to watch you sort your sock drawer. And it’s difficult to concentrate on the set of audio diaries you’ve collected in devastated New York when there’s someone on the other end of your headset, complaining they ‘haven’t seen you in years’ and ‘just want to know you’re alright’.

Consequently, the loot-shooters have learned from the MMOs. Destiny, The Division, Borderlands and Ghost Recon—all of these games are sold on their potential for co-op, yet are happy to grant as much downtime as you need. It’s possible to mainline an entire campaign with a friend, but equally, multiplayer can easily be condensed to its standout moments—the meticulously planned raid, or the climactic boss fight.

From a practical perspective, this convenience is dependent on the ability to drop in and out at will. But that’s not just a technical problem for developers, it’s a design one. And in turn-based tactics, nobody’s convincingly solved it.

The issue is that turn-based tactics deals in persistence. Every move matters because, once you’ve made it, you have to live with the consequences for the rest of the encounter. The loss of the wrong unit could mean your defeat minutes or hours down the line. But if a friend can enter the battlefield at will, like Gandalf on the horizon at Helm’s Deep, those consequences become ephemeral, and it’s tougher to imbue tactical choice with meaning.

What’s more, many turn-based games are a matter of positioning. Victory is determined by the tank you left blocking the bridge, or the archer whose range you underestimated. If a co-op partner were to disappear from a match midway through, they’re liable to leave a gaping hole in your frontline, exposing you to the spears and mockery of your opponents.

In fact, changing the odds in either direction during the course of a game is unlikely to sit well with tactics fans. Besting a map is akin to solving a puzzle - you’re engaging with the challenge a designer has set and proving that through sheer smarts, you can come out on top. Any whiff of difficulty modification cheapens the outcome.

Faced with these problems, the most obvious solution is to lock players in for the duration of a match—if you don’t finish it together, nobody does. But that brings us to another issue that makes turn-based tactics ill-suited to co-op—sheer time commitment.

It’s not as if the genre is incapable of respecting our time. Into the Breach stuffed enormous tension into tiny maps that required just 10 minutes of attention. But almost two years on, that game is starting to look like an outlier, and nobody has converted its magic into co-op yet.

In two and a half hours of play, my friend and I completed just two maps of Wargroove: Double Trouble. I don’t know how much Picross that equates to, exactly, but it’s a lot. There’s certainly room for more efficient victories than ours—after the castle assault, we were rated just one star out of three. But as turn-based tactics veterans who’d both played a decent amount of Wargroove before, we found our session extending far beyond the time slot we’d intended. The enthusiastic amateur dialogue narration of 8pm had turned into sullen silence by 10pm, and all we wanted was to end the war we’d sunk so much effort into.

Any adult will tell you that if a planned social event resembles real commitment, it may never happen. There are tax forms to fill in and dishwashers to unload. Steam co-op has become the ideal way to catch up with friends because it lasts as little or long as you like, and at present, turn-based games simply don’t fit that model.