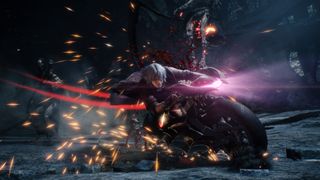 It appears as though Capcom has removed the controversial Denuvo DRM from Devil May Cry 5, just shy of a year after its initial PC launch.

In a patch released on February 6 and spotted by Reddit user MostafaOmara, Denuvo was removed from the game entirely. The DRM has been accused of causing many problems when applied to games, such as degraded performance thanks to high CPU usage and even reducing the lifespan of SSDs.

While many of these accusations are debatable, DMC5 is in the unique position of having briefly had two separate builds, one with and one without Denuvo. Thanks to a hiccough in Steam's branch management at the game's launch, people were able to compare performance and found that the build that did not have Denuvo performed, on average, 25% faster than its DRM-laden counterpart. In real-world terms, that means an improvement of about 20FPS.

In the last few years, Denuvo has been used less like a standard DRM and more like a way to stave off early piracy for games. Many publishers decide to use Denuvo for the first few months of a game, before patching it out at a later date when the rush to torrent the game has died down. Capcom, in particular, is no stranger to this method, having removed it from Resident Evil 2 and Resident Evil 7 in the past.

Even with Denuvo, DMC5 is an absolute corker of a game, being described as "one of the best brawlers on PC" in Tom Senior's review.