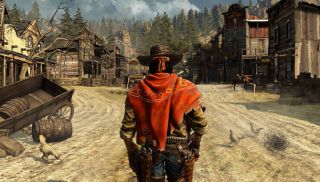 Fans of the Wild West will know there were two prominent activities of the time: shooting things, and reminiscing about that time when you shot some things, usually while using metaphors more tortured than a buffalo in a field of cacti. This teaser video for Call of Juarez: Gunfighter is very much the latter, as narrator Silas Greaves talks about the various legends he's buried.

Infuriatingly, the trailer's main purpose is to announce another trailer next week. Still, along with it we get a fresh batch of screenshots and info. The game is due out for PC, PSN and XBLA - suggesting a smaller scope than previous Call of Juarez games - and promises encounters with various outlaws, including Billy the Kid, Pat Garrett and Jesse James. Techland also say you'll be able to master the art of "dodging bullets" and "lethal combos", neither of which seem entirely in keeping with the theme.

Call of Juarez: Gunslinger is due out "Q1 2013", meaning it should be with us soon. For more details, check out our preview .