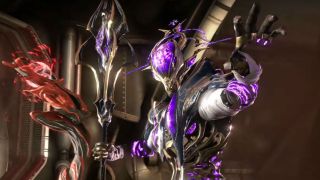 What are the best Warframe Shawzin songs? It didn't take Digital Extremes' legion of space ninjas long before the usual suspects were adapted to their new three-stringed instrument. Naturally the Shawzin song for Megalovania from Undertale was quickly committed to the sci-fi shredder, but there's already a treasure trove of other tracks to discover.

Warframe's Shawzin arrived in the game as part of the Saint of Altra update that also saw the release of the rapid new Gauss Frame. But, after you've had your fill of zooming around, you can now take a break with your new axe, now no longer just a decorative item. So, here, we're going to get you started with how to get Shawzin in Warframe and collected a few of our favourites to get your songwriting juices flowing.

Warframe: How to get Shawzin

Now that Shawzin is no longer just a decoration but a playable emote, too, you're going to want to know how you can get your hands on it. There are a few different variations available on the Market: Dawn, Dax, Mimica, and Nelumbo. Mimica can change colour based on the appearance of the Frame playing it and Nelumbo offers a unique sound.

To play the instrument you need to activate the Shawzin emote in your gear wheel. You'll know this has worked as your character will kneel down and hold the instrument, with the musical interface appearing.

When it comes to how to use Shawzin in Warframe, this Warframe wiki guide offers a useful primer on PC controls, scales, and transcription. It also offers sample songs such as Twinkle Twinkle Little Star and Happy Birthday; pulling out the standard, real-life acoustic just won't cut it at parties anymore.

Shawzin songs in Warframe are transcribed as numbers, letters, and symbols. Each song can be manually recorded for up to four minutes with 100 notes. With practice the following song codes will make more sense but, put simply, the first number corresponds with the scale on which the song is played and every note consists of three characters, which are case-sensitive.

Through the Fire and Flames - Dragonforce