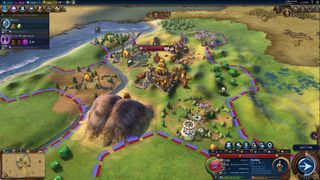 Welcome to our round up of the best 4X games on PC. Ever since the term '4X' was coined for the original Master of Orion, we’ve been Exploring, Expanding, Exploiting, and Exterminating our way through fantasy, history, and the depths of space. The genre has seen something of a renaissance in the last half decade, and while it’s great to have options, there’s also a lot to sort through.

Not every 4X game is for everyone, so we’ve taken a look at all the major players to enter the stage in recent years and why you might, or might not, want to play them.

Let's start with an unusual one. Dominions 5 is a 4X game about warring gods and their fantastical armies. You start by designing your deity, which could be a raging dragon or a mystical inanimate rock. Turn by turn you muster armies, recruit wizards to research apocalyptic magic spells, and fend off the attentions of other pretender gods.

Dominions' visuals are... old school, let's say. You need to dig into the community and get some decent user-made maps but, once you've done that and scanned the manual you'll find a detailed strategy game that generates mad stories. I'm used to controlling spaceships and cavalry in 4X games, only in Dominions can I send an alliance of satyrs, wyverns, elemental spirits and ghosts off to fight some atlanteans. The AI is easily to beat once you have played a few games but the game thrives in multiplayer about other people.

Who's it for: Players happy to get past primitive visuals to unpick a detailed magic system and command dazzling and varied factions.

Sins of a Solar Empire: Rebellion

A unique blend of 4X and RTS set in space, Rebellion is more fast-paced than most of the games on this list. It’s a standalone expansion, but also the definitive version of Sins currently available—so you don’t need to worry about grabbing the original to have a good time.

Who it’s for: Existing RTS fans who want to branch out into 4X, and players who like to get to the action fast and maintain a challenging pace. This one may be a little chaotic for the turn-based armchair generals of the world.

This turn-based fantasy 4X revolves heavily around Hero characters and a faction leader called a sovereign who can go on RPG-style quests and be used in many aspects of empire management, not just limited to combat.

Who it’s for: Classic RPG fans will feel right at home with the quest system, and the customizable fantasy armies are likely to appeal to tabletop miniature painters of the Warhammer and Hordes persuasions.

One of the most intriguing aspects of the universe in which Endless Space (and its sequel) are set is the mythology behind it. Much revolves around the ancient empire known as the Endless, and the quasi-magical Dust they left behind.

Who it’s for: A good all-around entry level space 4X that will also challenge experienced players, and holds added appeal for anyone who wants to unravel facets of a mysterious, pre-written story while dominating the galaxy. It’s also available for beans now that ES2 is in Early Access.

If we could crown a king of 4X, Sid Meier’s Civilization would have little competition for that throne. Taking one of an armload of civilizations from the ancient to the modern age while competing for various victory conditions, this is the series that has championed the genre for years.

Who it’s for: Even with Civ VI out, Civilization V frequently goes on sale for absurdly low prices, so if you’re not sure you’ll like the series and just want to try it out without dropping the full $60 on the new one, by all means take advantage. It’s certainly an excellent, entertaining game in its own right, particularly with the Brave New World expansion. Plus, the mod scene is excellent.

While most of the other games on this list put you in a randomly-generated world or galaxy, EU4 is built on an extremely in-depth recreation of Earth between the years of 1444 and 1821. You can lead any nation on the planet, from France to the Comanche, through centuries of colonization, exploration, and technological discovery.

Who it's for: Considering it’s the highest review score I’ve ever given out, it’s almost easier who to ask who it’s not for. The complexity of the simulation and sprawl of interlocking systems for trade, war, and diplomacy might intimidate newcomers to 4X and grand strategy, but EU4’s interface and tooltips do an excellent job of helping you wade into the shallow end and get a feel for the water.

Eador: Masters of the Broken World

Taking the role of a demigod battling others of your ilk for control of the shards (all that’s left of the eponymous broken world), Eador is another 4X game that’s hard to categorize. It features 4X, RPG, and board game-like, tactical turn-based elements.

Who it’s for: Eador’s greatest strength might just be how different its setup is compared to most other 4X games. The breaking of the game world into shards, which each behave like a smaller version of a strategic map in a game like Total War or Crusader Kings, means you’ll enjoy it if you’re looking for something a bit different than the standard map conquest or flipping largely static planets in a vast expanse of space to your color.

Taking the Civilization formula into space, Beyond Earth casts you as the head of one of the first human colonies on an alien planet. You guide its development and compete with other colonial concerns using mechanics that will feel highly familiar if you’ve played Civ 5.

Who it’s for: Beyond Earth is, in my opinion, a bit of a misstep in the Civ series, lacking elements that drive its siblings to success. While it has some cool things going for it, like a nonlinear tech system that allows you to evolve your futuristic technology in a number of distinct directions, it ultimately feels like a high budget Civ 5 mod that didn’t hold my interest for more than a couple dozen hours.

Similar to its sci-fi counterpart Endless Space, the unfolding fantasy epic of Endless Legend takes place in a richly realized world with character and backstory to spare. Civilizations are highly customizable, and each presents distinct opportunities.

Who it’s for: We awarded Endless Legend a Commendation for Design in 2014. It has its foundation in the time-tested elements that make 4X what it is, but is unafraid to build on and remix them in ways that will especially interest long-time players who might be suffering from genre fatigue. Beyond that, anyone just wanting to explore a rich and interesting new fantasy setting won’t be at all disappointed.

Warlock is pretty close to what I’d imagine a well-done fantasy overhaul of Civilization might look like. It makes good use of neutral factions on the map to be more than just an early-game annoyance.

Who it’s for: Due to its relative simplicity and adherence to genre norms, this is a fairly welcoming first step for those wanting to branch out into fantasy 4X from other subgenres. It also has a sharper sense of humor than its more dour, grandiose counterparts like Endless Legend and Fallen Enchantress.

Allowing you to discover the stars in a pausable, real-time galaxy, Distant Worlds features one of the more robust models of a civilian economy (which can run on auto-pilot while you handle the political stuff) I’ve seen in a 4X game.

Who it’s for: Aside from just being an overall well-designed 4X, Distant Worlds will have a special appeal for those who like to focus on exploration. This is because it really succeeds where so many other sci-fi games have failed: it makes space feel really, really big.

Similar to Sins of a Solar Empire, Star Ruler 2 is a bit of a 4X/RTS hybrid. It boasts quite in-depth systems for diplomacy and planetary development.

Who it’s for: This one skews toward the higher end of the complexity scale, and the sheer amount of fine control you have over its systems might be intimidating to newcomers. If you’re looking for gigantic, animated space battles, however, it may be worth your time to wrap your head around it.

Galactic Civilizations has cemented itself as the other 'blockbuster' contender in the 4X space, and GalCiv III is the most polished and extravagant entry to date.

Who it’s for: If you’re sick of cookie-cutter victory conditions, one of the most positive changes GalCiv 3 made to the series’ formula was turning victory into a set of objectives you can pick and choose from. So even two different runs going for the same victory condition might look different.

Stellaris takes Paradox’s historical formula and blasts it to the stars where you’ll manage military, political, and economic aspects of your space empire.

Who it’s for: Fans of historical grand strategy will feel at home in Stellaris, but for those used to more traditional 4X, it takes some getting used to. There’s a much heavier focus on politics, with elements like your form of government and the will of your citizens playing a large role.

The most recent in the lauded Master of Orion series doesn’t do much we haven’t seen before, but it plays the old hits well and wraps them in stratospheric production value and some big name sci-fi voice talent.

Who it’s for: Despite being so new, MoO is bog standard 4X. Not much has changed here since its 1996 predecessor other than the graphics. That does make it a nice starting point for total newbies, but the real draw is hearing John de Lancie lament the war that's brewing between his empire and yours.

Endless Space 2 builds on some of the best ideas of its predecessor, this time crafting more unique story content for each of the distinct interstellar empires.

Who it’s for: It shouldn’t surprise you at this point in the list that connoisseurs of interactive storytelling should jump for anything that says 'Endless' on it. Endless Space 2 is also arguably a better starting point for newcomers than the first one, as it’s made lots of improvements to your ability to access important, contextual information.

Civilization VI emerges from its chrysalis to reveal the most transformative and fresh take on the series in its storied history. Also, it has Sean Bean.

Who it’s for: Just about anyone who enjoys turn-based strategy. It presents lots of new challenges and opportunities even for the most weathered series veterans, but also remains among the most inviting 4X games for first-timers.