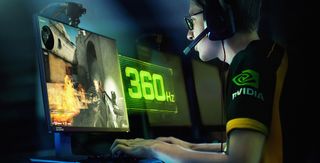 Nvidia and Asus have unveiled what is apparently the world's first 360Hz G-Sync monitor, the Asus ROG 360, ahead of CES. Not surprisingly, a display with this high a refresh rate is designed primarily with competitive gaming in mind, and you'll need a beefy GPU to take advantage of it.

360Hz seems a bit like overkill, but there was also a time when people thought anything higher than 60 fps was pointless. You might not get much use out of it in singleplayer games, but it could give you a leg up when it comes to MOBAs or competitive shooters.

With the upcoming monitor, Nvidia says that frames will be displayed every 2.8ms, which makes the game clearer and more responsive to superhuman reflexes. Thanks to G-Sync, esports pros won't need to worry about screen tearing, either.

It's a 24.5", 1080p monitor, but even with the bog standard resolution you're only going to be able to get the most out of the display on less demanding games, like CS:GO, and a high-end GPU. Nvidia, not surprisingly, recommends its RTX range.

Unfortunately, I don't think even the world's fastest monitor will be able to overcome the fact that I'm a sluggish guy in his mid-30s, but if you feel like your Overwatch performance is being held back by your old monitor, this one might be worth keeping an eye on.

There's no word on the price yet—given that it's aiming at the competitive crowd, don't expect it to be cheap—but it's due out this year and is being shown off at CES this week.