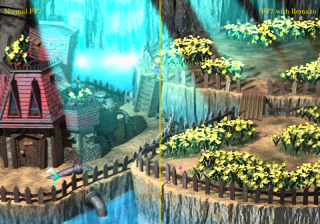 In the era of old games made new, there's hardly a classic game out there that isn't being remastered or recreated. For those that don't have official new versions, modders have begun making their own remasters using machine learning to create higher resolution versions of a game's original textures.

Below we've cataloged all the AI upscaling mods we know of so far with notes on how far textures have been upscaled from the originals, the machine learning framework used to create the new images, and of course a link to download and try them yourself.

Some mods are complete overhauls, while others only replace background images, UI elements, or characters. We've given a quick overview for each on what you can expect them to handle.

Doom's neural upscale is an interesting case in which the creator originally upscaled Doom's textures to 8x the original resolution than then downscaled back to 2x in order to regain the pixelated look of the original game. The creator also provides the 8x and 6x original files created by the AI before being retouched for others to experiment with.

So far, this upscale mod for Dark Souls Remastered only upscales UI icons. The creator mentions in the comments that they are also attempting to upscale environment textures but have so far not had luck importing the new textures in either the Prepare to Die or Remastered versions of Dark Souls.

The Morrowind Enhanced Textures mod replaces 100-percent of Morrowind's game textures. If you're looking to return to Morrowind with a fresh face before the Skywind project comes out, this is a good way to do it.

Like Remako for FFVII, the most noticeable difference in the Moguri mod for FFIX is the background textures. The amount of detail added by AI is particularly impressive in all the natural, green environments. The Moguri mod only works with the Steam version of FFIX. It does a bit more than textures though, also adding in 15 new soundtracks by Pontus Hultgren.

This upscale mod for Vice City replaces most of the game's textures. Interestingly, not all original textures come from the PC version of Vice City. Some textures from the Xbox, PS2, and mobile versions of Vice City were used as they had higher resolution than the native PC counterparts. In order to use the upscaled textures for the Steam version of Vice City, you'll have to downgrade your game version to 1.0, which the modder explains just a bit on their page.

This upscale for Half-Life isn't super well-documented but it appears that the uploader has replaced all of the environment and character model textures in its latest version. You can find a link to download the files from a Google Drive space in the description for the video above.

Hexen's original art style seems to play really well with upscaling by Gigapixel AI and ESRGAN in this upscale mod. According to its description, this mod upscales more than 3500 textures for Hexen.

Knights of the Old Republic I & II: Complete Character Overhaul

Modder Red11by has created two different mods, one for Knights of the Old Republic and its sequel. Both should upscale textures for all NPCs in each game and all armors.

This Max Payne mod replaces what the uploader estimates as 95% of the game's textures. As with other upscale mods increasing detail on human faces, it's a bit eerie seeing higher resolution faces on lower polycount character models.

This mod for the Resident Evil HD Remaster replaces almost all of the textures in the new version of Resident Evil with upscaled and then manually corrected versions. However it doesn't replace rooms that were created in 3D for the remaster. In the future, modder Shiryu64 is planning to update the game's UI, background textures, and cutscenes as well.

The Gigapixel AI upscaled mod for Red Faction is supposedly complete, including upscaled versions for all of the game's textures.

This upscale mod for Jedi Knight: Dark Forces II is usable as-is though modder "TreeMarmot" cautions that they have not been retouched to correct and visual oddities. They intend for this mod to be used as a jumping-off point for other modders to create their own high resolution versions with corrections and touchups.

This mod for Sonic Adventure Battle 2 upscales level textures by 4x original resolution and skybox textures by 8x. According to the modder, this mod "does not include Weapons Bed, Eternal Engine, Egg Quarters, Lost Colony, Cosmic Wall, Chao Neutral Garden, Boss Levels (except Big Foot) or in-game cut-scenes except the first two in Hero story." They are planning to include those areas in subsequent releases of the mod.

This mod for upscaling Turok 2 isn't well-documented but claims to include textures for the entire game.