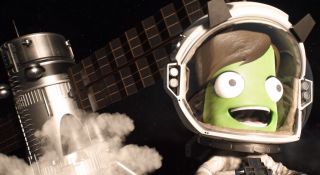 Kerbal Space Progam 2, coming next year, aims to expand the space sim beyond the Kerbol system with interstellar travel, and generally make building rockets and learning the basics of astrophysics a bit more approachable to new players. It's also going to support multiplayer, modding, and have prettier explosions when your rockets inevitably go boom.

Hungry for more details on how developer Star Theory is expanding Kerbal, I talked to creative director Nate Simpson at PAX. Here's what I learned.

"For people who like to have that kind of structure, there are goals for them to pursue and rewards for hitting those goals. But also, it can be a completely self-directed mode where you just go out and collect science and use that science to advance yourself along the tech progressions. We've done that because different people play the game in different ways. I was always very fond of how quiet the universe, the original game was, where you know, it's kind of beckoning, right? It's not telling me 'you've got to do that,' and 'you've got to do that.'

I know that there's a universe out there to explore and I want to see what kind of trouble I get into out there, then be rewarded for achieving things in that universe. I love that form of progression, but I do know that a lot of people really like having specific goals. So those are there for the people who like to play that way.

Progression mode will give you reasons to use all sorts of vehicles, like space planes

I mostly think of Kerbal as a rocket ship sim, but the game supports other kinds of vehicles, too, and some players had no interest in exploring the Kerbol system: they just wanted to fly space planes into orbit. KSP2 is actually building those kinds of experiences into its career mode.

"We absolutely wanted to preserve as many of the parts from the original game in our version of the game. At the same time we wanted to justify them. We didn't want them to just be this vestigial branches on the tech train. We wanted them to be valuable. And fortunately we've got a bunch of new celestial bodies in this game and they've given us an opportunity to create specific landing puzzles or landing challenges that require the use of some of these parts that previously might not have been indispensable to the core progression.

So we want there to be an emergent need for you to build an aircraft that has wings. I won't get too into the details about how we've done that, but there are now planets and moons for which the ideal solution to that challenge is the crafting of a specific sort of vehicle. And actually, I think it was pretty clever. I'm pretty proud of the solution we came to there. So now I feel the entire tech tree is now well justified in utilitarian terms."

In sandbox mode, Star Theory is still deciding how much freedom to give you

Kerbal 2 will have a career mode, with objectives that guide you from Kerbin to orbit to the Mun and eventually through interstellar travel. But there's also sandbox mode, where you have freedom to build whatever you want without the game telling you what to do, or slowly dishing out new parts. But because Kerbal 2 is so much bigger than its predecessor, the developers are still figuring out exactly how much freedom to give you. I asked if I'd be able to start sandbox mode out in the galaxy somewhere, and Simpson said that's still up for discussion.

"For example, the base progression and stuff, that's a whole set of problems that are currently being worked on right now. There's certainly an argument to be made that you could get into some spoiler territory by giving people access to literally the super, super, super advanced stuff all at once. So yeah, we're still kind of banging away on that type of problem."

There are no black holes in Kerbal Space Program 2 "currently"

We just gotta run into some black holes out in the vastness of space, right? Well, Simpson says they haven't built them into the game yet, but left the door open to that happening during development, or being modded in.

"There are currently no black holes. In the same way KSP1 was, it's a product that's continued to evolve and be supported over nearly a decade. We are building a platform, the purpose of which is to be highly extensible, highly moddable and to have a very, very long life. So we're hoping that we're continuing to add interesting content in this game for the coming decade. And yeah, that sounds like a thing that'd be cool."

You can pretty much reenact The Martian in KSP2

I asked Simpson what sci-fi movies would be possible to stage in Kerbal Space Program 2 and he had a few ideas.

"You can do Gravity, although Gravity is horribly inaccurate in many ways. You can do The Martian. What kind of drive does the Avatar ship have? I actually don't know that in detail, what that ship uses but yeah, I mean you can anything that involves interstellar colonization."

I don't know if that's a hint about jungle planets with blue cat people on them, and it also doesn't sound like you're going to be growing potatoes on Kerbal's version of Mars. But marooning an astronaut, then staging a daring rescue mission? That's definitely in.

Kerbals will be even more expressive this time around, but probably won't puke in space

I asked Simpson about his favorite little touches in KSP2, things that aren't vital game mechanics but that subtly add to the experience. He talked about the Kerbals themselves.

"I love what we've done with the Kerbals. The Kerbals in the portrait views are now susceptible to the forces of flight. So if you're spinning a capsule very rapidly, you'll see them all begin to lean in one direction and then they start to get woozy and they start to lose consciousness. When you're launching at a very high rate of acceleration, you'll see them compress in their seats a little bit. They kind of squish.

They were really key to my falling in love the game originally. It's weird how important they are to this game because without them, it's sort of a model rocketry simulator. But with them, you're constantly reminded of the spirit of fun. It's fun to fail when these guys are there and failure is so important to this game continuing to be fun, right? Because the way you learn how to play is by crashing and then rebuilding in a slightly different way."

As for g-forces so extreme the Kerbals blow chunks? Not gonna happen. They're seriously tough astronauts, apparently.

"We're actually not showing the puke itself, but you do see them puff up their cheeks a little bit."

I had to ask, but Simpson wouldn't give me a straight answer. Typical FBI.

"All I can say is that it's a big universe and you will be richly rewarded for exploring it."