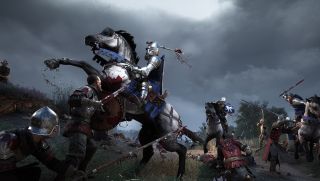 Torn Banner Studios has kicked off a new blog series detailing Chivalry 2's development with a retrospective on its predecessor. Details on the sequel will be shared in the coming months, but the first blog from studio president Steve Piggott still gives us some idea of what to expect.

The studio sees Chivalry's melee combat, multi-stage team objectives, as well all the screaming and dismemberment as the reasons it struck a chord with so many players, but it also acknowledges some of its mistakes, especially its failure to address issues that arose with the combat over time.

"This one we hear about the most, and we simply agree it was our biggest mistake," writes Piggott. "As time and player experience progressed, the combat on Chivalry’s servers began a downward trend ... We should have fixed it, and never did. This was due to a mixture of originally underestimating how much of an issue it was and failing to listen to the right voices in the community."

When Chivalry 2 was revealed at the PC Gaming Show, Piggott told us that the new melee system will address those problems, though the studio has yet to go into specifics. Returning players will apparently recognise the basics of combat, but it will be a "much more natural, fluid and varied experience."

In the blog, he also expresses regret over Mirage: Arcane Warfare, the spell-casting follow-up that was removed from sale last year. Unfortunately, it didn't manage to snare an audience large enough to keep it going. Piggott calls the game's announcement "tone deaf" and acknowledges that players wanted them to focus on Chivalry instead.

If you're hungry for more details on Chivalry 2, you'll be able to find out more in the next blog post.