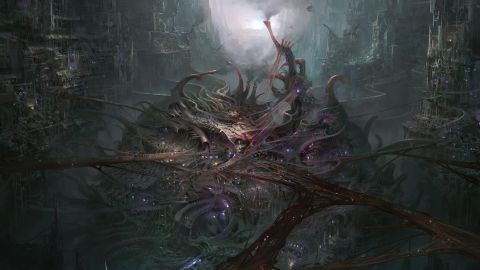 A slow start gives way to a thought-provoking adventure in a remarkable setting. A fitting follow-up to a beloved RPG.

Torment occupies a special place in the history of PC roleplaying games. It sticks  in the memory: Baldur's Gate's stranger, sexier, smarter sibling, interested in headier stuff than swords and sorcery. The original Torment was highly regarded and its influence is felt throughout the RPG genre, from Pillars of Eternity's soul-reading to the warped denizens of Fallen London. Yet it's never, until now, had a proper follow-up. Other designers have borrowed pieces of Torment, but never the whole.

Torment: Tides of Numenera is that successor. Following in the footsteps of Obsidian's Pillars of Eternity as Planescape: Torment once followed Baldur's Gate—and based on the same engine—inXile have recaptured much of what made the original game special. This is a free-roaming, dialogue-heavy isometric RPG that places thought resolutely before action. Although combat features, the entire campaign can be played without acting violently.

The Planescape setting is gone, swapped for the Ninth World—the far-future background to Monte Cook's Numenera pen and paper roleplaying game. This is an unrecognisable take on Earth one billion years in the future, with the accreted technological detritus of innumerable vanished civilizations underpinning a medieval society that brings Clarke's third law to life.

There's magic, but it's really science—and the science is strange, spanning time travel, the transference of consciousness, parallel universes, and nanomachinery. Michael Moorcock and Jack Vance are other prominent influences, from Torment's writing to its look: this is science fantasy done in the psychedelic pastel shades of a 70s paperback.

You enter this world as the Last Castoff, coming to terms with your new identity as you plummet to your death like the doomed whale in Hitchhiker's Guide To The Galaxy. You're an immortal creation of The Changing God, a futuristic sorcerer who transfers his consciousness into new bodies to unnaturally prolong his life.

His discarded former selves—the castoffs—spontaneously form their own consciousnesses when they're abandoned. After death you enter the Castoff's Labyrinth, a dimension within your own mind where your character's class and key traits are determined by a memory-probing personality test. And after that you awaken, miraculously healed, in the city of Sagus Cliffs.

Castoffs like you are being hunted by a mysterious killer called the Sorrow, and finding a way to escape this seemingly-inevitable fate motivates your first steps into the Ninth World. Quickly however Tides of Numenera becomes more about discovering this new world and the people who inhabit it, with your own story intertwining closely with what would be considered sidequests in any other game.

The term fits less well here, because Tides of Numenera is cleverly designed to thread a diverse array of different plotlines together. Sagus Cliffs is relatively compact by RPG city standards, but the game gets a lot of use out of each character and location.

There are multiple ways to encounter each storyline, with the way you happen to discover a quest often proving as important as the decisions you make at its conclusion. Your choices really do matter, too: an early roleplaying decision that I expected to result in a 'game over' screen meaningfully changed the way my adventure began. If you pick a trait like mind reading for your Last Castoff, you can trust that this'll be incorporated thoughtfully throughout the entirety of the campaign.

Your actions also influence the titular Tides, an abstract expression of different aspects of the human psyche as colours. The red tide represents passion, for example, while selflessness is gold. The tides you align yourself with change how characters respond to you, and they form a crucial part of the Last Castoff's journey.

The pace of the game does struggle a little during its initial hours, however, particularly if the setting is new to you. I had an advantage—I've got a big pile of Numenera corebooks next to my desk and I've run multiple campaigns. Tides of Numenera has the unenviable task of introducing the Ninth World alongside its own complex interpretation of it, and this means a lot of picking through unfamiliar terminology for a new player. Things improve with both fluency and progress: by the time the plot really kicks into gear, you'll have all the knowledge you need.

This isn't your RPG if you want to spend a lot of time thinking about item stats and party strategy: that's Pillars of Eternity's domain, not Torment's. Instead, a relatively simple skill system dictates how you use might, speed and intellect points to achieve your character's goals—from climbing a wall to convincing someone to see things your way.

What's impressive about this system is the way it is adapted to suit different circumstances. Succeeding at a task works the same way whether you're having a conversation in the open world, working through a Mere—a fragment of a memory that takes the form of an illustrated choose-your-own adventure—or fighting a battle. During dangerous encounters, the game becomes turn-based and combat-specific abilities can be used: but your regular skillset is still there, and if you want to solve a 'fight' by talking or hiding or rewiring an ancient device then you have that option.

Although the Ninth World is weird it's arguably more grounded than Planescape: your companions are an unusual bunch, but they're people too. This new Torment misses out on the levity provided by having a flying skull for a best friend, but it also feels more mature. Its designers have decided that busty rogues in bondage gear are best left to the late nineties.

A note on PC performance

As a game that consciously evokes the isometric RPGs of the late nineties, Torment: Tides of Numenera's technical demands are low. It ran well on multiple modern machines, with stable framerates and fast loading times.

Instead you'll meet, for example, an academic accompanied by the ghostly shades of herself split across infinite alternate timelines, a girl with a god in her pocket, and a glowing young man possessed—perhaps literally—by a manic need to turn every situation into an adventure.

A little bit more humour would help disarm some of the game's more self-serious moments, but I found the quality of the writing and the genuine philosophical complexity of Tides of Numenera's questions compelling in a way that games rarely achieve. To say this is an RPG written of shades of grey is an understatement: in fact, given the multi-hued Tides of the title, you could say that it's written in shades of everything.

Where the writing is consistently evocative, however, Torment's art direction is mixed. There are moments when it really comes together: particularly the Bloom, a city built into the bowels of a vast extradimensional creature. Yet a few areas feel like they could have done with a second pass—the Valley of Dead Heroes, supposedly a vast collection of memorials to all the world's dead, is a little drab and underwhelming. It's here that Torment falls on the wrong side of 'show don't tell'—a challenge for any story like this, and one that Tides of Numenera doesn't always successfully negotiate.

Your imagination is always there to pick up the slack, however, and if this game wants to give any of your muscles a workout, it's that one. The people who get the most out of Tides of Numenera will be those who want to do the reading, to infer their own connections between people and ideas, to roleplay as 'their' Last Castoff. When you've come to terms with the parameters of the Ninth World and internalised the type of RPG this is, the imaginative investment it requires becomes much lighter.

After Torment sheds its initial inertia, however, a few problems persist. Companions sometimes move erratically and get stuck on scenery, although this never really hinders your progress—it just looks strange. Animations can be stiff, particularly when viewed up close, and particle effects aren't as dazzling as the phenomena they're supposedly representing.

This is also the sort of RPG that might frustrate serial completitionists: if you're the type of person who wants to rinse out every area and ace every quest, recalibrate your expectations before jumping in. Trying to min-max Torment misses the point, which is to live out your character's decisions. This is an RPG that you roleplay, not an RPG that you game.

I also found myself wishing that they hadn't recorded a voice for the Last Castoff. There's very little voice acting in the game as it is—only a handful of characters, chiefly companions, and even then only during key conversations—and the protagonist's own lines are limited to 'I'm on my way' and 'I just leveled up'-type barks. Yet the voice they chose feels completely at odds with the person expressed through the writing. In fact, you have so much freedom to determine the Last Castoff's personality that I suspect no one performance would be a good fit. It's far from a dealbreaking issue, but it was persistently distracting.

Despite these issues, I'm impressed by Tides of Numenera both as a follow-up to a beloved RPG and as the digital debut of a fascinating setting. I've deliberately avoided specifics in this review, but I'm confident that if you've got a part of your brain dedicated to clever sci-fi story prompts you'll find a lot to love here. There's no escaping that Torment is a strange beast—it's a game for readers, an adventure for people who don't necessarily want to fight—but it's great to have it back.

A slow start gives way to a thought-provoking adventure in a remarkable setting. A fitting follow-up to a beloved RPG.