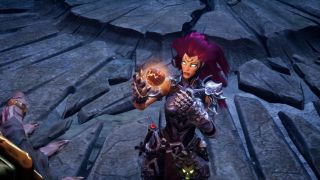 THQ Nordic has acquired a lot of games and studios over the last few years, and the publisher has just raised over £171 million/$223 million that it intends to put towards even more acquisitions. It's big, but it wants to be bigger.

11 million new Class B shares were issued on Wednesday, and the money raised has been earmarked for "new acquisitions of franchises, game development studios or other assets which complement the operations," THQ said in a statement.

Goat Simulator's Coffee Stain Studios and Kingdom Come: Deliverance's Warhorse Studios are among the most recent acquisitions, and over just the last year alone it's managed to snatch up Deep Silver owner Koch Media and games like Outcast, Alone in the Dark and Carmageddon. Even the publisher's name is technically an acquisition.

"Ultimately, on the very long-term basis I want all my companies to be financed through the cashflow from making great games that fans and consumers will enjoy and pay for," CEO Lars Wingefors told GamesIndutry.biz. "However, our strategy right now is to build something substantial, diversified and evergreen through acquisitions and substantial organic development growth. As you know, we are just approx 0.5% of the global market and have a long way to go before we reach the next level."

By snatching up the Darksiders license, it was able to resurrect the series with some of the original team, and while Darksiders 3 suffered from a diminished scope and a dodgy camera, it nevertheless made its money back and contributed to a good end to 2018 for the publisher. Deep Silver also launched Metro Exodus last week, which Andy thought had a stunning post-apocalyptic world but rather boring FPS combat. Check out his Metro Exodus review.

If one of your favourite series has been languishing in purgatory for a few years, maybe THQ Nordic will fish it out?