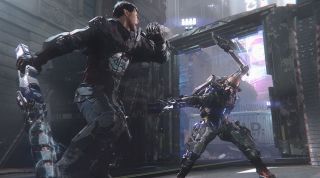 You’ll come across strange magnetic locks early into your time with The Surge 2. They tell you they need the EMP-44 Starfish to unlock them, but where on earth is that? Well, the good news is that its unmissable. The bad news is that you’re going to have to kill Little Johnny to get it. He’s a pain in the bottom, but one that can be taken out once you know all the tricks. The best part is that this particular ability also unlocks anything that is magnetically locked, including magnetic lifts and exo-wires. It can even be used to stun enemies and is likely to become an essential part of your arsenal as a result.

There is an uncountable amount of exo-wires littered throughout Jericho City and the ability to traverse them comes in two flavours. The Force Hook is the first piece of the puzzle that you’ll come across, and it is found in the underground area after you go through Gateway Bravo. In this ruined city you’ll have to fight your way past police robots and AID members to progress. Eventually you’ll come across a creepy area with children’s decorations where you can assume something nefarious was going on. You’ll find a magnetic lift here that goes up. Once you’re up high, walk around until you come to the part of the building that looks like the head of an AT-AT. Inside will be a glowing red item, this is the Force Hook.

The Lifter Hook allows you to go up the exo-wires, and it is given to you by an NPC after your second encounter with Brother Eli. This opens up nearly every aspect of the city and is essential to seeing out the rest of the game. It’s probably for the best that it’s unmissable then. Not only does it help you get around, it looks cool, and has some serious Home Alone vibes; which is nice.

After things have gone horribly awry in Jericho City, you’ll start finding these strange walls of Nanites that require a ‘special attack’ to break through. Thankfully, this is another unmissable ability, and is one granted to you after you’ve made your way back to the CREO University while pursuing the big bad. You’ll have to fight off a group of four robots at once, but once you’ve done so you’ll be able to interact with a brain in a jar to gain the last of the four abilities.