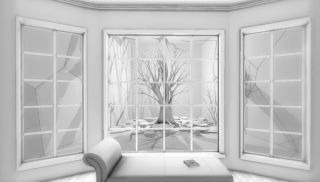 Published by Lords of the Fallen Studio Deck13, and developed by Polish studio Super Sexy Software, The Shattering is an upcoming psychological horror game that bucks many of the genre's staple trends.

It's set in a pristine white austere setting, for example, as opposed to the dark and foreboding locales we're otherwise used to. There's no combat, nor are you required to hide under beds or well-placed lockers; and it explores the human psyche—holding a mirror to self-reflection—as it relays its narrative through memory and circumstance, as opposed to monsters and jump scares.

I've played an early build—which I'll write about in more detail at a later date—and I admire the way it handles mental health: from a pragmatic perspective, against the well-worn and misinformed tropes the genre so often perpetuates.

I caught up with company CEO Marta Szymańska, game designer Arkadiusz Burczyk and Deck13's Michael Hoss to discuss the game's direction, how they liaised with a psychiatrist to best convey the game's subject matter, and how it aims to stand out from the psychological horror crowd.

Having dabbled in mobile games and various 3D modelling projects, The Shattering marks Super Sexy Software's flagship title. It's due in 2018.

PC Gamer: Against the deluge of horror games which rely on darkness to convey their scares, I like the idea of one set in an austere white setting.

Marta Szymańska: You know, we've been working on this game for some time now and it started from a lot of talking and discussions about horror games and horror tropes. Then we thought: what do we like in these games nowadays, and what don't we like? How do we make it a little bit different in a way to show how people can be scared not only by simple jump scares?

We thought the easiest way to do this was to present a contrast, which from black is of course absolute white. We started researching and reading about what white means, what does emptiness represent, what sort of impact does that have on us—not only in games but in books, films, everything. It turned out that it's really connected to the psychological fear of not knowing what is around you, and being clear to see but having nothing to impact and interact with.

The deeper we went, the more interesting it became so we decided, let's do it, let's try to create something that's going to influence us in that way.

There aren't many, if any, horror games that take this approach. Why do you think this is?

MS: If you have an idea, there's probably a lot of people who have the same idea at the same time. The difference between you and them, though, is that you're actually creating this idea into a reality. Some games use this style—Superhot, Mirror's Edge, for example—which show how the white can tell more by the feelings and atmosphere.

Why hasn't it been used in horror games before now? I think because of  stereotypical thinking—that if you want to play a horror game, you assume it's going to be set in a hospital, that it's going to be dark, that it should have ghosts and things along those lines. Our point with The Shattering is to break that rule, to break that stereotypical thinking. Most people are scared because of inner—fear, of something that they've experienced themselves—this is a psychological way to approach the subject and one which we think works best.

In China, for example, white is however the colour that stands for sad feelings which is also a cultural thing. When people set out to make a horror game, they often think, okay, this must be something dark. Horror isn't always about scaring people straight up and is often about capturing the viewer or players' emotions.

From the small section I've played, The Shattering leans heavy on self-reflection, as the main character explores their past experiences. What is it about this as a story mechanic that's so scary?

Arkadiusz Burczyk: John as a character is unique but all of us as players and human beings can discover something from him and themselves—everybody has something they can relate to. Everyone has John in them in certain ways.

Without giving away too much, how much will the player's choices affect the conclusion—are there good and bad endings for example?

MS: There are a few endings, and of course your choices will impact how it's going to end. I don't want to say whether that's going to be good or bad, but the player can impact the information he or she uncovers in relation to how the story is tied together.

What's your own relationship with psychological horror games like?

AB: Silent Hill is a big inspiration. With each step creating the game, we wanted to take what was inspiring for us from the series but at the same time didn't want to copy it. We don't want to make a duplicate.

MS: Yeah, just because Silent Hill is a big reference point doesn't mean we're going to make another Silent Hill. I have a list of inspirations: Stanley Parable, Until Dawn, Layers of Fear, PT; but we also have games like Wolfenstein, for example, in terms of storytelling, Among the Sleep, Antichamber, Portal, Amnesia, Max Payne 2, Murder Soul Suspect—there are quite a lot!

You've mentioned quite a few games there that favour exploration over confrontation, yet it's possible to fail in The Shattering?

MS: There's no combat, and the only defence a player has against The Shattering's world is to make correct decisions based on discovery within the environment. I suppose that's the combat. You can fail—there are some objects which tie to certain memories that can make your world shatter which will leave you with complete emptiness and in turn will result in the game being over.

Can you explain why, when examining his own memories, uncovering the 'wrong' memories results in failure for John?

MS: The lie in The Shattering is that everything is alright. If you have depression, the easiest way is for the person to cope is to say, 'everything is fine,' but to get out of depression or alleviate its symptoms, is to face up to the events that have happened in the past.

Uncovering the wrong decision can leave you in a world where you entertain this false sense of normalcy—where you stay in one place because it's comfortable. Actually, making harder choices will push this game forward.

You've spoken before about exploring the humanistic side of video games—nowadays, games are more often exploring mature and interpersonal themes. How important is it to you that videogames continue do this?

MS: We always discuss games not just as a form of entertainment but as a science used to help discover yourself. At the beginning when we first started this project, we spoke a lot with a psychiatrist and we had a few meetings. It was a very interesting experience for us, telling them that we wanted to create a game about John who has some issues and how to develop this.

The psychiatrist actually created a character profile for us that we based the protagonist around. We started with a person that was just as normal as any one of us, any day. I think making choices in the game will often see you making decisions not via John, but via yourself - you'll ask yourself if you're able to do this, is this the right decision or not, some decisions are going to be really hard to make.

What's been the most challenging aspect of making The Shattering so far?

MS: Ah, I would say 50 percent of our game is really talking about it because this is a very difficult issue to broach. We started making a game thinking it was going to fun - we now realise how much hard work it takes to make, especially tackling the mood, because the most important part of the game is the plot. It's a story-based game, so the plot needs to be really good and the story needs to make sense in its symbolistic and psychological way. We are constantly talking between ourselves - I think organising the whole thing is difficult.

And you plan to release in the first quarter of 2018?

MS: Yes, we're very optimistic, but so far so good.