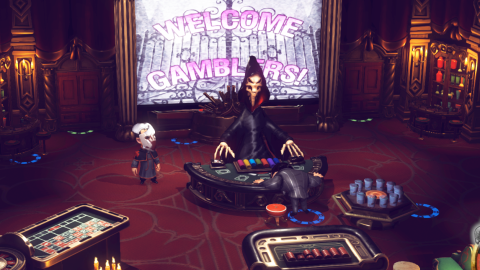 A stylish and creative adventure with a clever time-rewinding hook.

What is it? An adventure game where you live the same night over and over again, attempting to prevent a series of murders.
Expect to pay:  $20/£15
Developer: Cavalier Game Studios, Tequila Works
Publisher: Tequila Works
Reviewed on: Intel i5-6600K @ 3.50 GHz, 8 GB RAM, Nvidia GeForce GTX 980
Multiplayer: No
Link: Official Site
Buy: Humble Store

It's the paradoxical curse of the time-traveler: there's never enough time. So it goes in The Sexy Brutale, a clever and extremely stylish adventure game in which you must relive the same evening over and over in a time loop, hurrying through an elaborate mansion as you attempt to stop a series of murders before the clock runs out, rewinds, and resets. Each guest you save from the murderous staff members endows you with a new power and grants you deeper access into the mysterious, labyrinthine manor, and each time you rewind the clock to relive the evening's events, you're armed with a bit more information on how and when the murders take place, and how to stop them.

You awaken in the mansion during the early hours of a costume ball, and begin making your way through the network of rooms, peering through keyholes, hiding in cupboards, and observing the oddball guests and masked, murderous staff. Catching snatches of conversation and collecting bits of background information, you slowly put together the circumstances of each murder, then begin figuring out how to stop them from happening. The murders range from straight-forward (someone is shot or poisoned) to the result of bizarre supernatural rituals, and they're grimly entertaining to witness (and one perhaps horrifying, depending on how you feel about spiders).

The challenge is that you can't personally interfere. You can only indirectly disrupt the deadly events by changing some element involved in the murder. If you walk into a room occupied by a guest or staff member you'll be chased out, though it's forgiving enough (it takes a long time to die when caught) to feel like stealth isn't a real factor. In fact, as the game wore on I found myself regularly strolling through occupied rooms just to avoid waiting for the other characters to leave, which detracted a bit from the initial sneaky feeling of the game.

This Groundhog Day-ish situation is a clever twist, but in many ways The Sexy Brutale is still a standard adventure game filled with the same standard activities: you revisit the same locations over and over, listen to the same conversations again and again, and collect items and try to determine what their purpose is.

The difference here is, items you've collected (typically) return to their place of origin when the clock is rewound, meaning you'll need to reacquire them, perhaps dozens of times, until you figure out their purpose—and that purpose may not even be accessible until much later in the game. This can definitely get repetitive—I don't know how many times I collected a record from a phonograph before I discovered what it was for—but as you explore and observe, each evening gradually turns into what is essentially a speedrun. Dash to this wing, collect this item, slip through this passageway, hide from this killer, reach a destination and activate some item just before a guest arrives. The early repetition can be a little trying, but perfectly performing the necessary steps to prevent a murder ultimately feels pretty satisfying.

Not everything resets when you wind the clock back. You'll retain the powers you've acquired by saving a guest: prevent a blind woman's murder and your hearing will improve, allowing you to eavesdrop with incredible clarity, and save a singer and you'll be able to shatter glass with your voice. You also retain knowledge of the secrets you've discovered, such as security codes or the location of hidden passages, and they're added to your map of the mansion. The map, by the way, is blessedly detailed, important for keeping your bearings in the sprawling manor, which can be confusing due to perspective shifts when entering and exiting certain rooms.

The Sexy Brutale is a beautiful game, each chamber and hallway interestingly and exquisitely decorated. The manor is filled with secrets and curiosities, hidden rooms and intriguing portraits, and bizarre and often morbid sights. There's no voice-acting, and though the writing is engaging enough to want to read the description of every last item in the mansion, the story itself is a trifle over-indulgent—the final half-hour is almost entirely exposition, providing players with little to do other than click the mouse through a long series of text panes. It culminates in a conclusion that perhaps would have been more surprising if it hadn't taken quite so long to get there, but it's the journey and not the destination that makes this temporal adventure worth your time.

A stylish and creative adventure with a clever time-rewinding hook.