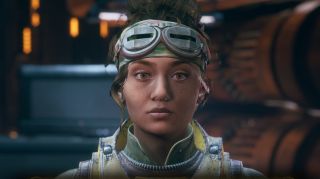 The corporate nightmare sci-fi RPG The Outer Worlds was a big hit for Obsidian. It's not the deepest roleplaying experience ever, but it's gorgeous, sharply written, and maybe most impressive of all, it's relatively bug-free. It's just a really fun game: We called it "an entertaining, uncomplicated RPG in a colorful universe" in our review, and that really nails it.

In the wake of that success, Obsidian announced today that the adventure will continue. "We want to take this opportunity to thank the incredible team behind The Outer Worlds. It is because of their hard work and dedication to this project that we received the Best Narrative, Best Performance - Ashly Burch, Best RPG, and Game of the Year nominations at The Game Awards," Obsidian social media manager Shyla wrote.

"To all of those who voted for us in The Game Awards, you are all fantastic and we are so grateful for your support. The reception to The Outer Worlds has been unbelievable to see, and even just being nominated means a lot. However, the journey isn't over yet as we are excited to announce that we will be expanding the story through DLC next year! Details will be made available at a later date."

The Outer Worlds didn't win any of the awards it was nominated for, but in its defense the competition was fierce: Best narrative and best RPG went to Disco Elysium, the best performance award was given to Mads Mikkelsen (for Death Stranding), and Sekiro: Shadows Die Twice claimed game of the year honors. There's no shame in losing to any of those.

"We just wanted to personally thank our team for doing a wonderful job and our fans for their tremendous support," The Outer Worlds co-director Leonard Boyarsky said. "And Tim would like to say what an honor it was to work with me."

"Whatever, Leonard," co-director Tim Cain added. "Now that we’ve finished, I expect that certain photographs will be destroyed, as per our agreement."

Despite its healthy state at release, The Outer Worlds wasn't entirely without issues. Q&A lead Taylor Swope recently offered some insight into the headaches of troubleshooting with a discussion of one particularly tough bug to squash that was causing companions to die, even when they weren't actually dead.