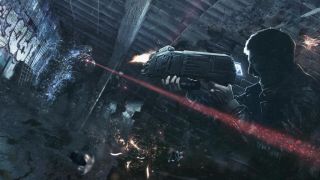 I had completely forgotten about Get Even, the Farm 51-built shooter that was announced in very early 2014 with a strange little trailer and a promise of a "photo-realism aspiring, single/multiplayer hybrid first person shooter." But today's announcement of a publishing deal with Bandai Namco—and a delay to 2016—has brought it all back. Unfortunately, what is has not brought back is any clarity over what the game is about.

See what you make of this: "Get Even is the psychological thriller movie genre made video game, blurring lines and blending the frantic tension of the FPS genre with the oppressive intimacy of a complex personal investigation," Bandai Namco said in the announcement. "Eschewing the usual clichés and gung-ho scenarios currently inhabiting the FPS genre, Get Even packs an alternative, mature and intriguing story combined with strong shooter elements."

I cannot help but be impressed by how much that description has interested me, even as it tells me virtually nothing about the actual game. It's a shooter, which we already knew, and it will feature a "mature" story, another detail that was already on the table as well. Interestingly, no mention is made of the multiplayer elements, despite that being a focal point of the original announcement and the "making of" trailer from last April that's embedded above. That may or may not reflect a change in the game's direction; The Farm 51's website talks about removing "the artificial barrier between single-player and multiplayer," but it also still carries a 2015 release target.

2016 is admittedly not much detail as far as launch windows go. The important thing, at least for those of us who think this is a potentially interesting idea, is that Get Even is still being worked on. And with Bandai Namco's involvement, hopefully we'll start to see more of what's in store in the relatively near future.