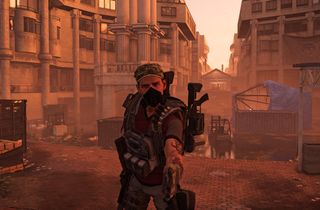 More on The Division 2

If there is any single feature that could define The Division, it would be the Dark Zone. A weird blend of PvP and PvE, it manages to mix the uneasy alliances of older survival games like Rust and DayZ with the ruthless kill-or-be-killed atmosphere of modern battle royale games like Fortnite and Apex Legends.

The Dark Zone has always been a highlight for the game, and, with The Division 2, the system has received a significant upgrade. Multiple zones, gear normalization, recon missions and more are all now integral parts to the experience, so you’ll want to know what you’re up against before venturing past their gates.

To get access to the Dark Zones, you’ll need to first recruit the Dark Zone Operator, Senait Ezra. Fortunately, she’s one of the earlier members of the White House staff you can recruit and becomes available after you’ve completed three settlement missions for the Theatre.

Once recruited, she’ll make her way to the White House, where, once spoken to, she’ll guide you towards the first of the Dark Zone Recon missions. Each of the three zones requires you to complete a recon mission before entering, which helps acclimatise you to the unique mechanics of the Dark Zone—contaminated loot, extraction and so on—and the differences in landscape between each of the zones.

As the first zone you unlock, Dark Zone East is probably the zone that most resembles the Dark Zone from the first game. A large mix of built-up and natural areas, DZ East is defined by its large sightlines, making it an ideal place for snipers.

Once you’ve completed the Dark Zone East recon mission, the second one, found at Dark Zone South, will become unlocked. DZ South is very different to East, and more closely resembles Dark Zone North, an expansion to the first game’s Dark Zone that came late in its life cycle. It’s a very dense area, with limited lines of sight and lots of corners to hide around. Shotguns and SMGs do well in this environment while marksman rifles and light machine guns may not fare quite as well.

After finishing this recon mission (which is surprisingly short compared to the other two), you’ll then be prompted to complete the Recon mission for Dark Zone West. West is the mid-point between South and East’s playstyles—it’s more built up than DZ East, but not quite as compact as South, making it the perfect playing field for mid-range weapons like the assault rifle or the LMG.

It’s important to keep track of the requirements for each of the three recon missions, as they each have their own level requirements before becoming accessible, even though they appear on your map after finishing a previous zone’s recon. On the plus side, you’ll have full access to a Dark Zone as soon as you’ve finished the recon mission, meaning you could enter Dark Zone East and get your fill of being a Rogue before ever even stepping foot in South or West.

How gear normalization works in The Division 2

A feature that was a significant point of contention for many in the first game makes a comeback for the sequel, with gear normalisation meaning everybody is on an equal footing once they enter the Dark Zone regardless of what equipment they’ve earned up to that point.

Gear normalisation assigns a different set of stats to every weapon in the game that takes effect once you step foot into the Dark Zone. This means somebody who’s only just hit level five has the same chance of doing well as somebody who’s played a thousand hours and has the very pinnacle of Agent equipment. You can see both your open world and normalised stats in the equipment menu.

It’s worth nothing, though, that this only applies to loot, and so more dedicated players will still have some advantages thanks to which perks and skills they may have unlocked. It’s not recommended you enter the Dark Zone before at the very least having both skill slots unlocked, just to ensure you’ve got a decent level of utility once you’re inside.

The Dark Zone has an entirely separate progression system to the rest of the game, the Dark Zone Level. While in the first game it was mostly just a meaningless number, in The Division 2 there are now tangible benefits to upping your rank.

For every five levels, you’ll unlock a new tier of perks available through the Dark Zone Officer. Only one perk from each tier can be enabled, however they give you serious benefits for when you’re in the Dark Zone. The first tier only features one perk that allows you to carry more contaminated items, while the higher tiers include things such as increased XP for certain actions (killing Rogues, surviving the Rogue timer yourself, finding monuments), daily rewards at the Dark Zone safe house, faster Rogue actions, reduced Rogue timer, and maintaining a contaminated item on death.

DZ XP is earned through a variety of actions: killing enemies, killing Rogues, going Rogue yourself and surviving the timer, finding collectibles or discovering locations. Carrying over from the later updates of The Division, you won’t lose DZ XP on death, so it pays to be slightly reckless when levelling just to get you access to the perks as soon as possible.

By far the most effective method, however, is completing landmarks, which require you to head to a specific area and kill a powerful named enemy. Doing so will net you a ton of experience and some decent gear to boot, although higher difficulty ones can be very tough for a solo player to deal with. Other players can clear a landmark them before you arrive so you’ll have to be quick, but there’s always at least a few of them active. You should be able to just run around in a circuit and complete landmarks as they become available, quickly levelling up in the process.

If gear normalisation and rogue states sounds a bit too forgiving for you, a grizzled Agent, you may want to explore Occupied Dark Zones.

When Occupied, one of the three Dark Zones will become a much more challenging place. When a Zone has become occupied, gear normalisation will be turned off, Rogue status will be hidden from everyone else, friendly fire is enabled, and the turrets around the entrance stop working. AI enemies will also become a lot harder too.

Primarily because of balance considerations for when gear normalisation being disabled, Occupied Dark Zones aren’t available until you hit level 30 and enter the endgame phase.

The defining mechanic of the Dark Zone is the presence of Rogue Agents. Some players will work with you as allies, or simply run about and do their own things. Others, though, may choose to act against you and play as Rogue Agents. Players can go Rogue at any time, and can and will kill you for your loot, making them the biggest threats found in the Dark Zone.

Going Rogue is a conscious decision a player make through the menu, meaning accidental friendly fire (or other players hoping to make you go Rogue by jumping into your line of fire) won’t mark you. However, hacking terminals, stealing other players’ extractions from the zipline, and breaking open some chests, will be enough to push you into a Rogue state.

The Manhunt system also returns from the first game, where particularly aggressive Rogues will be highlighted on the map for non-Rogue agents to target. A new level has also been added in the form of the Disavowed Agent. These are Rogues who have killed other players, and so are marked for non-Rogues to get their retribution, but not enough to trigger a full Manhunted Rogue state.

Running and hiding from the other players is still a viable strategy should you wish to lose your Rogue status, however there are also other ways to both lose and maintain the status for greater rewards. Finding a Manhunt terminal gives you the choice of returning to a non-Rogue state, or hacking it and increasing your time with the promise of even better loot should you survive it.

How The Thieves' Den works in The Division 2

Rogues aren’t just about senseless violence anymore as the introduction of the Thieves’ Den gives anybody who chooses to be bad something to work towards. The Thieves’ Den is an exclusive hideout for players who commit enough Rogue actions within a limited time, rewarding bold playing over just camping and waiting for the end of the timer.

To get access to the Den, you’ll need to complete a series of challenges to triangulate its location. The easiest way is through hacking SHD terminals (like the one at the end of the tutorial mission) or stealing Dark Zone chests. Doing these, as opposed to killing other players, will prevent you from becoming a Disavowed Agent or a Manhunted Rogue, giving you a better chance of completing all the objectives without player interference.

Once you’ve chased the trail of objectives, the location of the Den should unlock. Once you’re inside, you’ll be rewarded with an exclusive merchant (that you’ll have to unlock separately) that sells high-quality loot, and your Rogue status will be wiped, allowing you to return to civil Agent society.

Extraction is the most vulnerable time for any player in the Dark Zone, as it’s a common place for players to be overcome by greed and try to swipe your loot at the last available second. One player fires a flare, alerting everybody else in the Dark Zone that an extraction has started. Those wanting to get their equipment out safely will need to hold off for a period against enemies, both NPCs and Rogue Agents.

Because of this, it’s always recommended to hang back for as long as you possibly can if other players are around; stay hidden, keep a line of sight with the zipline, and get ready to defend your extraction through any means necessary.

Each Dark Zone has two extraction points to pick from, very roughly equidistant from a central safehouse. When picking which point to go to, keep in mind factors like whether one is already active, whether there are numerous landmarks around it (which would mean more players in the vicinity), and the position of any higher-notoriety Rogue Agents. Picking a quiet spot means you’re less likely to be ambushed or betrayed, but sometimes having some well-meaning other players watch your back and deal with the AI enemies at a busier extraction can be good too.

Alternatively, you can be everybody’s worst nightmare and go Rogue. Stick by the point and kill players who attempt to extract their stuff or wait until after they’ve tethered their bags to the zipline before stealing the entire batch. Everybody is on high-alert during an extraction so justice might be swift but pulling it off and stealing the whole stash is a very tasty reward.

The Dark Zone has always been a fascinating concept that makes The Division unique. A challenging area where nobody can be trusted, with high risk and greater reward, yet not as straight a PvP experience as you might first expect. Even if you’re not one for competitive play, braving the Dark Zone can lead to some memorable experiences and some very powerful gear. Good luck, agents.