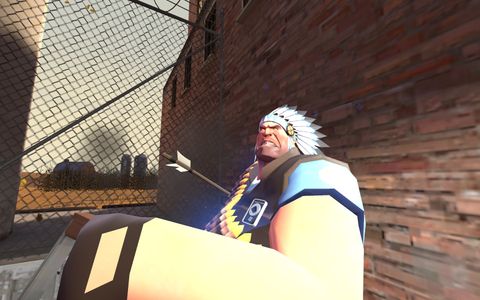 A brilliant, ever-evolving multiplayer shooter. three years on and Team Fortress 2 is better and cheaper than ever.

Team Fortress 2 is the best game I've ever played. Over the last three and a half years I've clocked up 666 hours on Badwater and Dustbowl. I've stabbed, shot, cloaked, crafted, traded and unlocked my way to a backpack full of awesome weapons and hats. Where Team Fortress 2 is now, with its ridiculous weapons, headgear and recipes, is a long way from the lean multiplayer shooter it launched as.

And now it's free. Imagine people on servers freezing at the news: the Red Scout's fish flopping in his hand, the Blu Soldier raising his frying pan, about to crown a Pyro before stopping and looking around. All this? Free? Really?

It's difficult to comprehend. Fortyeight maps, nine classes, most of the weapons: Valve are giving them away for nothing. All you need is a Steam account. With that you have a free account for TF2: you get a 50-slot backpack to hold your stuff, access to all the standard items, and limited crafting (no rare items).

To upgrade to premium (everyone who bought the game is a premium user), with 300 backpack slots and access to all weapons and full trading, all you need to do is buy one item from the microtransaction store. The cost of the cheapest items (such as the Soldier's replacement rocket launcher, the Direct Hit) is 29p. That the dearest item, a pack containing all the weapons and apparel of the most recent update, costs £59, is of no consequence.

Even though Valve make money from sales, they've provided a number of ways of getting items for free. You can unlock weapons for every class through achievements. You get weapons given to you through random item drops. If you don't like what they've given you, you can use the crafting system to smelt the weapons into raw material for weapons you do want. Or you can trade. Simply playing the game will give you ample rewards. It's the best example of F2P I can think of. There's no splitting of the community, either: new maps and game modes are always free.

Whether it's Capture the Flag, Control Point or Payload, the servers are full of glowing Heavies with pet Medics in tow, Pyros charging into flaming targets with their barbedwires axes raised over their gimp masks, Soldiers and Demomen flying through the air, boots on fire. They host last-minute dives to stop a Payload bomb detonating the server, and rows of dancing Engies. I've dropped in on a server where everyone was battling a laser death cat that was spitting bees from its mouth. Even with intense rocket fire and grenade spam from everyone in the game, it still reigned supreme.

Valve's continual tinkering has led to classes that can play multiple roles. The Demo-man started off as a grenade-spamming defence class, but with his new boots, shield and sword add-ons, he's a frontline, headhunting warrior. Possibly with an Afro. The Spy can either be skulking in a corner, cloaked and waiting for the perfect moment to strike, or he can swap watches and run into battle and drop a fake corpse just to mess with the enemy.

Anyone signing up to Team Fortress 2 for the first time now will be part of an ever-expanding community, something that Valve have smartly steered but also learned from. It's a vast experiment in incremental game design, but one that provides comics, movies, and piles of hats. Every update is an event and every player can be part of it. For a game that started out as just a multiplayer shooter, Team Fortress 2 has become something astonishing.

A brilliant, ever-evolving multiplayer shooter. three years on and Team Fortress 2 is better and cheaper than ever.