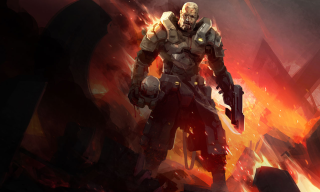 Who wants another free-to-play MOBA? Everyone? You all raised your hands so fast I didn’t even see them! Well then you’ll all be thrilled to hear that Bandai Namco has announced its newest game, Supernova, a space-themed free-to-play MOBA which aims to bring the genre closer to its RTS roots. Everything you’ve come to expect from the MOBA genre is here—a 5v5 match on a three-laned map with minions automatically pushing down towers while you control a stronger hero, in this case called a commander, who can level up through combat. Supernova diverges from the well-established formula by allowing you to customize your minion waves.

When I sat down to play Supernova at an event in San Francisco earlier this week, I was initially confused by developer Primal Game Studio’s pitch that it combines the RTS and MOBA genres. Given its origin in Warcraft 3, isn’t a MOBA already an RTS? After playing, however, I realized that Primal wants to bring the macro and economy aspects of an RTS to the traditional lane-pushing of a MOBA. Amid the last-hitting and cooldown tracking, each player is also in charge of a tech tree and unit production that determines the composition of their minion waves. Additionally, each time you level your commander, you earn points toward improving individual stats along with talent points for further customization—a system that takes the place of an item shop. Apart from these key differences, Supernova pretty much felt like business as usual.

Outside of a match, Supernova tells the story of two warring factions: the “Humans” and the “Cyborgs.” Based on the commanders that represent each faction, they might be more accurately called the “People in Robot Suits” and the “Aliens with Robot Parts” but I guess that’s a bit long-winded. The classic bells and whistles of the free-to-play business model are all here; leveling your account unlocks new faction abilities (comparable to League of Legends’ summoner spells) and army units. Your commanders can also be outfitted with craftable accessories—see League of Legends’ rune system. Cosmetic skins will be available for purchase with real money, but Primal assured us that Supernova wouldn’t put power up for sale.

It’s both ridiculous and wonderful that after 13 years I can still track a game’s influence to Warcraft 3, but the MOBA genre has kept its legacy alive. Where Dota 2 and League of Legends were based on the famous Defense of the Ancients custom game, Supernova feels more comparable to another custom game from that era, Footman vs Grunts. The army management provides an extra level of strategic depth that I could see a hardcore community rally around, but that’s only if the majority of players aren’t scared off by just how deep that hole goes. I found myself completely overwhelmed by the amount of stat screens, resource and point types, and even number of pre-game choices.

If people are criticizing Heroes of the Storm for being MOBA-lite, then Supernova is the opposite end of the spectrum. The skill and strategy cap are undoubtedly high—even in my short time playing my mind raced with synergy ideas and how a team could take advantage of the unique army system—but that high cap comes at a high cost. The cost in this case is the steepest learning curve of any MOBA I’ve ever played. To its credit, Supernova allows you to let certain functions like leveling and army building be handled automatically, but that felt like a tacked-on move to make it more accessible to a casual market where it otherwise may not appeal.

Ultimately Supernova is going to live or die by the community that rallies around it. While its success as an e-sport seems unlikely—given that spectators usually like to understand what's going on in the game without being experts themselves—it could definitely be home to a high level of competitive play. As to be expected from Bandai Namco, it featured some top-notch production quality with good voice acting, animations, and character concepts. Its space theme is a refreshing change of pace in a fantasy dominated genre, but it’s all going to come down to Supernova reaching the right audience.

Supernova has been in development for three years and is already accepting signups for its closed alpha on its official site.