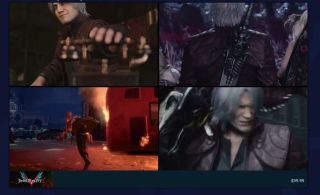 It's so hard to keep track of what's coming out on Steam every week, every day, every hour, that our team at PC Gamer likes to follow a pair of Twitter accounts, @microtrailers and @whatsonsteam, that list new games as they're released, along with six second trailers and screenshots. Apparently Valve likes those accounts too, because as part of a set of experimental new Steam features called Steam Labs, it took the idea and ran with it: "Micro Trailers are six-second looping videos designed to quickly inform viewers about titles on Steam with a presentation that's easy to skim. This experiment is a fancier version of the Twitter bot of the same name."

The presentation of these trailers is quite nice: they're big thumbnails until you mouse over them, at which point they start smoothly playing a video clip. It's not really enough to get a good sense of these games, in most cases, but it is probably enough to help you decide if you'd like to know more.

The Steam Labs page shows off a variety of ways these micro trailers could be presented, with larger and smaller thumbnails, whole rows that play at once, and some especially nice 2x2 grids of four clips from the same game playing at once. All the micro trailers are sourced from the trailers developers upload to Steam. (We had nothing to do with the PC Gamer curator page being featured on the Steam Labs page, but hey, cool).

Because it's an experimental feature, we don't know how, or if, these micro trailers will be fully integrated into Steam, or how much manual work is involved in what we see here. But we're glad to see that What's on Steam's creator had a part in turning his bots into official Steam material.