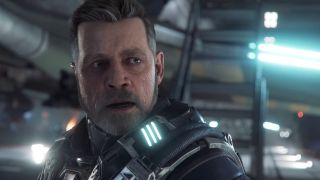 Eight years have passed since Cloud Imperium Games first mentioned Squadron 42, Star Citizen’s standalone singleplayer campaign. In that time we’ve seen delays heaped upon delays, major feature changes and plenty of announcements about its star-studded cast, which includes Gary Oldman, Mark Hamill, and Gillian Anderson. So much has happened, in fact, that you’d be forgiven for forgetting what on earth the whole thing was about in the first place.

Luckily, we’re here to put you back on track. We’ve collected everything you need to know about Squadron 42 in one space: That includes the latest information on its release date, up-to-date details on its major features (will it have co-op? VR?) as well as all the latest trailers.

Strap in: Here’s everything we know about Squadron 42.

Squadron 42 is a standalone singleplayer campaign in the Star Citizen universe, fully playable offline. It was announced as an episodic trilogy, which many people seem to have forgotten, and each episode will be a fully-fledged game in its own right. CIG are calling Episode 1 simply ‘Squadron 42’. Work on Episode 2, called Behind Enemy Lines, and an unnamed Episode 3 has already begun. In terms of the Star Citizen timeline, Episode 1 is set before the events of the main game (aka the ‘persistent universe’). CIG has not yet said when Episodes 2 and 3 are set.

Episode 1—which we’ll just call Squadron 42 from now on—will take place across 28 chapters. Back in 2015, when it was only planned to be 21 chapters long, head of CIG Chris Roberts said it’d take around 20 hours to complete, which is still the latest estimate we have.

What is the Squadron 42 release date?

After a series of delays—Squadron 42, like Star Citizen, was initially due to launch in 2014—the latest estimate for a Squadron 42 beta is the second half of 2020, according to the game’s detailed roadmap. No date has been set for a full release.

However, as the roadmap page stresses, that window is subject to change, and many of the roadmap milestones penciled in for the second half of last year have been missed.

In Squadron 42, you play a new recruit in the United Empire of Earth Navy, an elite military unit fighting to protect humanity against both aliens and bandits. You’ll live aboard a massive capital ship, and from there you’ll be dispatched to various missions, which will take place both in the cockpit of various customizable spaceships and on foot (it’s roughly a 50-50 split between the two). Expect a mixture of large-scale space battles and first-person shooting, and some missions will have multiple paths to their conclusions.

As well as the overarching story, you’ll get a chance to "define your character" through the actions you take, and a dynamic reputation system that changes your standing with various NPCs throughout the story.

Andy saw a chunk of it back in 2015: Read his thoughts here.

Squadron 42 has received a bunch of trailers over the years: We’ve picked out two that we think represent the game best.

The first is an hour of proper gameplay—a “vertical slice” released at the end of 2017. Watch it below, and if you want developer commentary, that version is here.

The second is the most recent Squadron 42 trailer, a non-gameplay "visual teaser" that CIG released at the end of 2019.

There are plenty more trailers to choose from: you can watch them by browsing our Star Citizen tag.

How is Squadron 42 linked to Star Citizen’s persistent universe? Do you need to own both to play one of them?

You can think of Squadron 42 and Star Citizen, for the most part, as separate entities: You don’t have to own one to play the other, and they’re both fully-priced games. However, some of the actions you take in Squadron 42 will cross over to Star Citizen, should you choose to make the jump.

So Squadron 42 is sold separately? How much does it cost?

That’s right. Currently, you can pledge $45/£43 to get guaranteed access to Squadron 42 (Episode 1, that is). That pledge also gets you immediate access to Arena Commander, an arcadey dogfighting and racing game, and Star Marine, a Star Citizen FPS. The price may change on full release.

You can also buy Star Citizen packages that get you persistent universe access plus Squadron 42 for a reduced price.

Some past backers had Episode 2 thrown in when they pledged, but CIG has not yet said whether or not Episodes 2 and 3 will be sold separately for everyone else.

Will Squadron 42 have co-op?

Sadly not. Despite originally promising the game could be played with a friend, CIG has since changed its mind, saying it wants a more authored, solo experience that’s fully playable offline.

However, CIG plans to chunk off some of Squadron 42’s bigger battles and let you play them as one-off co-op scenarios, although that’s unlikely to happen until after release day.

Squadron 42 will have VR at some point, but probably not at release. CIG has said the game is built to be "VR friendly," but that it’s focusing, understandably, on the core of the game first.

Which actors are in Squadron 42?

What’s all this about a legal battle with Crytek, and how does it relate to Squadron 42?

It’s a long story, but the short version is: Crytek brought a lawsuit against CIG for using Crytek’s engine, Cryengine, and part of that lawsuit hinges on the fact that CIG allegedly used Cryengine for two games (Star Citizen and Squadron 42) instead of the agreed one.

Crytek has requested to withdraw the lawsuit, and says it will refile when Squadron 42 is released. CIG disputes the original claims, has called Crytek’s action "attention-seeking" and is demanding Crytek pay some of its legal fees. For the moment, there are still plenty of unknowns.