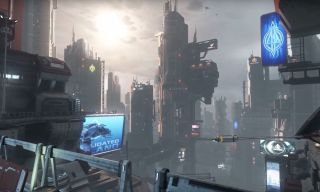 One day Star Citizen's various modules will coalesce into a huge interconnected world full of spaceships and adventure. That's the dream, anyway. The multi-crew demo is worth watching if you want to see how Star Citizen will ideally operate when finished. However, in the quiet times between missions there have to be social hubs where you can "/celebrate" with friends in a space bar. That's what the social module is for.

Star Citizen backers will be able to roam the social hub later this month, but you can watch a video of someone else wandering around right now. The video above features narration by the Keeper Of Dreams Chris Roberts, and the one below shows the same area in greater detail at 60fps. Cloud Imperium has shown part of this zone before, but it's been greatly expanded. You can go inside shops and a pub (complete with reassuringly familiar beer taps). Everyone's dressed in the military gear built for Star Citizen's FPS module, but the devs plan to add off-duty clothing soon.

Star Citizen has drawn flak for its funding model, which sells virtual ships for hundreds of dollars, and for the perceived slow pace of development. Chris Roberts recently defended the process in a blog post, mentioning that 255 people are now busy building Star Citizen and the single-player campaign, Squadron 42. It's a project of vast scope and ambition, and hopefully it won't disappoint legions of backers

Here's the full cast, which includes the live multiplayer demo.