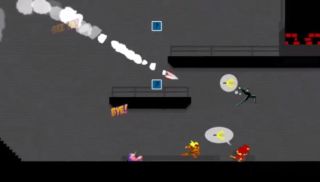 SpeedRunners is side-scrolling multiplayer racer being developed by DoubleDutch Games and "published" by No Time to Explain developer tinyBuild. It's an unusual situation - indies publishing indies - and makes you wonder if the tinyBuild guys strutted up with fistfuls of cash and business cards that said, "Join us! We're basically EA." According to them, that's not quite how it happened.

"It's by far not a standard collaboration as we're actively involved in the visual aspect of the game, as well as the personality part," tinyBuild tell us. DoubleDutch, meanwhile, get to focus on creating the core four-player competitive platformer.

The goal of the game is to beat the other heroes and be the first to run off-screen. With everyone sharing the same view, that becomes harder the further you are in front - your reduced vision giving you less time to react to obstacles.