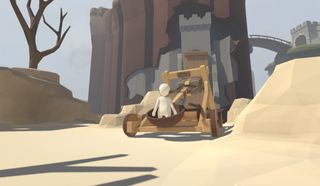 “Bob is a human. Just a human. No hero. Zero superpowers. Period,” is how comedic physics puzzle game Human Fall Flat describes its faceless, featureless lead character Bob. Which, to be brutally honest, is one hell of an understatement.

You see, Bob’s an unassuming builder who’s trapped in cycle of recurring dreams about falling. He can't die, per se, as plummeting off the edge of each playground simply returns him to the start of each level. Each stage of sleep mimics part of his “daily experience” and is adorned with traps and pitfalls and obstacles that must be overcome. But Bob’s got terrible balance. He’s awful at climbing, and he struggles to lift/push/pull/operate just about everything he lays his hands on—it’s remarkable he’s managed to sustain a job in construction if his dream self in any way mirrors his reality.

As such, guiding Bob around his open-ended puzzle-laden dreamscapes can be a taxing experience. That is, until the penny drops, you conquer the seemingly insurmountable challenge, and skip gleefully onto the next area or level. In these moments it’s wonderful—not to mention the fact Bob’s floppy animations, although purposefully cumbersome, are often hilarious. The following pointers should help keep that smile on your face.

In its most basic state, Bob’s appearance is pretty boring. His default Gang Beasts-meets-Morph-like getup is comprised of white overalls, a white cap, and, um, white everything, really. Human Fall Flat’s fairly basic customisation suite lets you paint your hero with a range of colours as you best see fit—and even lets you superimpose your own face onto your avatar via your webcam. As we’ve seen in the past, though, this often results in something that looks weird and creepy. Each to their own, I guess.

Human Fall Flat’s cartoon-styled levels are not only easy on the eye, but are also open-ended and packed with loads of interactable tools and toys. It makes sense to explore each new stage in turn before jumping head-first into problem solving mode, as there’s often multiple routes to success. Maybe this will help me get there? I asked myself on several occasions, and when a less obvious plan came together I felt immensely proud. What's more, you'll travel by rowing boat, speedboat, raft, train carriage and, ahem, catapult, among other modes of transport in order to reach your goals.

He might spend around 90 percent of his time clambering over boxes, castle turrets, canyon cliff faces and the likes, but Bob is absolutely terrible at climbing. With independently controlled arms (raised by the respective mouse/game pad shoulder buttons), hopping over even the smallest of ledges can prove challenging in the game’s early stages.

Once you learn that hoisting your limbs above your head prior to throwing yourself towards the top of a surface is key, though, is when things begin to fall into place. Sort of. Actually it’s still blooming difficult, but Bob’s awkward animations provide some genuinely laugh out loud moments—particularly when it all goes belly-up (sometimes literally), and you’re not too far from a checkpoint.

With so many paths to victory combined with destructible environments, the above image is likely to happen more often that not. Bob is a health and safety inspector’s nightmare, and my insistence on failing to let go of the things I forced him to grip onto foiled my puzzling performance more times than I care to admit. If it wasn’t platforms falling on his head, it was drawbridges, or mattresses, or reels of cable, or industrial bins, or—the list is pretty exhaustive, I think you get the picture. I once forgot to let go of a windmill, though, and was treated to a lovely view of an entire medieval castle level. That was nice.

5) Or use them to your advantage

Then again, there are the times where manipulating the seemingly dangerous parts of environment can work in your favour. You might use fire extinguishers to burst through windows in order to reach otherwise inaccessible switches; you might choose to reach a high platform by precariously crafting a makeshift tower made of debris, instead of using the elevator which was there the entire time that you didn’t spot; you might even decide that Bob himself makes for better catapult ammo than rocks—it’s all up to you. Heck, there might not be an appropriate reason to swing from that wrecking ball in the image above besides the fact you're fond of Miley Cyrus. Again, each to their own. Whatever makes you happy.

And why stop at Miley? Why not go full Sex Pistols, The Clash or the Dead Kennedys—or whichever contemporary punk band is considered cool these days—and smash up the place? Break the speakers! Wreck the furniture! Put a TV through a window! But, um, again—make sure you let go or you’ll wind up a couple of stories below, lying in a heap of shattered glass, clutching a flat screen television and feeling stupid. Rock and Roll!

Let's not kid ourselves: no matter how good you are at cracking puzzles, picking yourself off the ground, dusting yourself down and starting again is something you’ll want to get familiar with in Human Fall Flat. While its eureka moments are second to none, the amount of trial and error that can—and often does—go into besting certain challenges can be quite infuriating.

While I feel like I’ve bonded with Bob in our journey through his dreams—he’s made me laugh on several occasions—a small part of me hates him. Why won’t you stand up straight? Why can’t you reach that ledge? Why won’t you let go of that goddamn TV? Okay, so that last one’s on me—which is why some chillout time is important for both you and him. Find a quiet spot and hit the T key. That makes Bob flop to the floor and ‘play dead’, which never failed to make me smile.