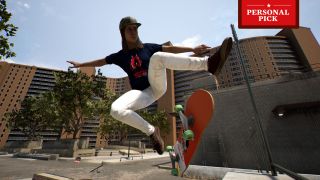 A 900 Christ Air to Darkslide in Tony Hawk's Pro Skater is easier to pull off than a kickflip to noseslide on a low curb in Session. In early Early Access on Steam, Session's bizarre control scheme matches a foot to each stick for the most realistic skateboard manipulation yet. It's a sim where small lines are major victories—complex combos that require the perfect angle, momentum, and inputs from two sticks at once. No one's keeping score either. You either pull of something sick or you don't.

Session can get even more complex and realistic if you want. There are options for enabling how quickly the board spins based on how hard you hit the sticks and how body rotation works based on how quickly you pull the triggers. But the real game changer is the manual catch option, which requires players to choose when to stomp down on the board kicking off a trick by slamming down the sticks. When I enabled manual catching after 10 hours of play, I had to learn how to kickflip again.

The extra layers of simulation might sound like just more plates to spin on top an already complex control scheme, but each option (while far from their final forms) only deepens the simulation, emulating the intricate relationship between a skater's eyes, feet, and board and the muscle memory tethering it all together. This can be Skate 4, if you want, or the much smaller, four-wheeled equivalent of Euro Truck Simulator.

Even with its buggy physics and imperfect animations, the result is a skateboarding game that doesn't just look like the real thing, it feels like the real thing. My brain has to manage the same variables: speed, angle, stance, rotation, timing—OK, I don't have worry about balance—but the key difference is Session involves your hands rather than your entire body. I don't exactly miss eating shit at the bottom of a six-stair over and over, so I'll take it.

And that authenticity has led to a natural rebirth of skating culture in a small, specific way. Check YouTube or the Session subreddit and you'll find a digital microcosm of the same stuff that dominated the late '90s through the early '00s: stylish clips and montages set to music. Takes me back to my Windows Movie Maker days.

The same communities have also figured out how to make Session an infinitely bigger game. The Early Access release launched with one big Brooklyn map, but since this is the PC after all, modders are continually making more. So far they've imported and cleaned up levels from Tony Hawk's Pro Skater 2, Skate 3, and made plenty more, including massive vert ramps for big air and simpler indoor skate parks for technical play. Custom outfits and skateboards are possible, too. I put together a Session modding tutorial for the curious, but the Illusory and Session Modding Discords are where the magic is actually happening.

All this to say: we don't need Skate 4. The developers of Session Creature Studios, modders, and video editors are making something better. Normally I caveat Early Access games and advise waiting for 1.0, but Session isn't just one to watch. It's one to play now.