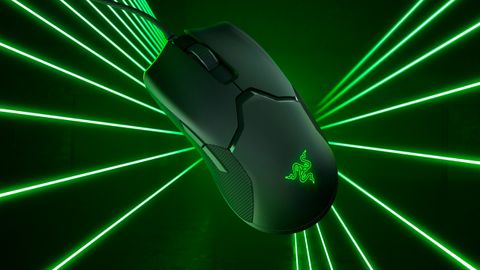 The look of Razer's new esports mouse may not be to everyone's tastes, but you can't argue with its performance.

There’s always a push for ‘bigger’ and ‘more’ when it comes to gaming tech, but not in this case; Razer flips the bird at that trend with the ambidextrous Viper esports mouse. Designed in collaboration with (and extensively field-tested by) competitors, this is built to be a precision weapon in the arsenal of any and all esport players. The goal? Simple: be faster. It may stumble on the way to achieving that, but the Razer Viper makes good on its promise nonetheless.

The headlining act here are switches that are meant to triple actuation speed. And yes, it’s a bold claim. But Razer’s secret weapon in this battle are brand-new Optical Mouse Switches that, according to their press release, "respond instantaneously to every finger press". Although you may be tempted to roll your eyes here, the science behind the idea checks out. You see, bog-standard mechanical switches fire electrical signals after metallic contact. This can result in multiple, confusing signals. A ‘debounce delay’ is utilised as result to clean things up, but that in turn slows down response time. By contrast, the new optical switches don’t need physical contact at all—they utilise an infrared beam and shutter system instead that shoots an electrical signal straight to your computer. In other words, there’s far less margin for error. The Viper is the first Razer mouse to use these switches, and the benefit is obvious. It has one of the quickest clicks I’ve experienced—period. What’s more, the buttons require very little force to press down. The side buttons offer a little more resistance, but they’re equally pleasing to use.

The latter buttons aren’t going to get in your way during play, either; they’re positioned just above the thumb-rest and are in no danger of being accidentally hit as a result. They’re also within easy reach should you need them. While it’s a shame that both the left and right button sets are active at once (unlike the Corsair M55 RGB’s clever failsafe where only one is functional at a time), I still didn’t have any trouble with pressing anything when I shouldn’t.

That’s because the Viper doesn’t really feel like an ambidextrous mouse. This may sound like a slight, but it isn’t—it’s far more comfortable than I was anticipating. The split loyalties of certain ambi mice mean that they’re not as effective as left or right-handed devices, yet that’s not the case here. Not entirely, anyway. The best left-handed mouse for gaming or a good right-handed unit will still be more ergonomically satisfying, but the Viper strikes an enviable balance even so.

I just wish I was as positive about the Viper’s overall design. Some will love the kit-bash aesthetic, but personally speaking? I’m not a fan. The design is a bit modular, as if three devices have been grafted together into one Franken-mouse. Similarly, the RGB Razer logo (one of the only LED features on this entire device, you may be pleased to hear) is hidden beneath a layer of plastic and only reveals itself when connected to a live computer. As such, there’s no way of telling that this is a Razer mouse at all when everything’s turned off. That’s a shame, if you ask me.

The Viper’s far from ugly, though, and it feels much better underhand than my small niggles make it sound. The rubber sides—comprised of dozens of tiny hexagons—mean that it always feels secure and under control. Equally, the matte buttons and palm rest are another hit. It’s grippy, but not in an uncomfortably grainy sort of way. What’s more, the soft Speedflex Cable encourages a smoother glide with less drag and kinks.

Which leads us neatly to another of the Viper’s selling points—its exceptionally light weight. Coming in at a mere 69g, this mouse offers a brilliantly smooth, effortless motion. In fact, it requires very little effort to swipe in any direction. A DPI limit of 16,000 helps, of course, as does a 5G optical sensor. To cut a long story short, the Viper is quick in every sense of the word (particularly when you can fiddle with the settings to your heart’s content via Razer’s software).

The only trouble is changing the DPI mode on the mouse itself. The button to do this is hidden on the underside of the Viper and isn’t clearly labelled either, so being able to change its settings on the fly is almost impossible. I’m not entirely sure why this button wasn’t placed below the (admittedly great) scroll-wheel as per usual; there’s even a space for where it’d normally go. It’s all somewhat baffling.

However, that’s a small quirk and it isn’t enough to sink my optimism about the Viper. Indeed, this is the best gaming mouse I’ve used for a while. Is it ‘bigger’ and ‘more’? Not necessarily. Is it better, though? Definitely.

The look of Razer's new esports mouse may not be to everyone's tastes, but you can't argue with its performance.