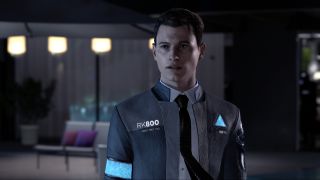 After a long stint on PlayStation, Quantic Dreams' weird thrillers have recently made their way over to PC. Heavy Rain and Beyond: Two Souls are available on the Epic Games Store now, and in an interview with DualShockers, Quantic Dream's David Cage confirmed that this is how the studio means to continue, no longer tied to a single platform.

Cage had been eyeing the door two years before the launch of Detroit, after more than a decade working with Sony. The PC ports allowed Quantic Dream to branch out, not just putting its games on the Epic Games Store, but also becoming a publisher, starting with its own games.

"Quantic Dream is not exclusive to any platform anymore," Cage said. "So yes, unless there are some specific exclusivity deals on a title-by-title basis, all our games will be released on all platforms at launch."

The caveat is a pretty big one. Each of the new PC ports launched exclusively on the Epic Games Store, so while it's not a platform exclusive, it's still tied to a single store, at least for now. It's considerably less restrictive that PlayStation exclusivity, however, and doesn't preclude them from appearing in other stores later.

While launching only on the Epic Games Store drew the ire of some, I'm just glad these big dumb games are on PC. They're one of my favourite vices, even when the stories lose the plot. Check out our Heavy Rain review while you're here.