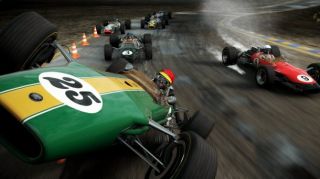 Project Cars, the sexy-looking driving game—hey, the clue's in the terrible name—has been delayed again. Publisher Bandai Namco announced today that the release date has been pushed into April to allow for some "final adjustments."

The game was originally slated to come out on November 18 of last year, but was postponed to March 20 in order to keep it from being lost in the crowded holiday shuffle. The new release date, April 2, is a delay of just a couple of weeks, but developer Slighty Mad Studios said in a statement that it's enough time to ensure players are given "the best gaming experience they could have."

"Moving a release date was not an easy decision to make, as we know our fans are eager to get their hands-on on Project Cars," studio chief Ian Bell said. "But we know that these extra days will allow us to provide the best game experience that our fans deserve. We assure you the wait will be worth it when the game does arrive early April."

We don't have a preview of Project Cars to share with you, but there are some awfully nice trailers floating around that you can feast your eyes on, including the one from January that's embedded above, and a gallery of 4K screenshots from last summer that will make your eyeballs vibrate with supercharged joy.