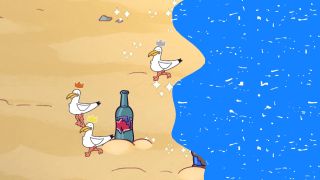 You may have seen sandpipers feed on a beach at some point: small, chubby birds rush toward the ocean as the waves recede, dig in the wet sand for food, and then sprint back up the beach as the next wave rolls in, tiny little legs pumping furiously to keep ahead of the water.

It's cute and fun to watch those little birds scurrying around on the sand, and it's highly reminiscent of The Beach, an endless indie battle royale game—though The Beach features seagulls instead of sandpipers and the gulls dig for gold coins instead of food. They also try to drown each other as they compete to be king of The Beach. These gulls aren't messing around.

Players spawn as seagulls, and as the ocean recedes they run down and dig in the sand, gathering gold coins. The wave comes back in quickly, and the seagulls need to flee back to the safe zone on the other end of the screen (these seagulls can't fly). If the wave overtakes you, you're 'poofed.' Gone in a burst of feathers. You lose all your coins (and your status, if you were the highest scoring player at the time) but you can respawn instantly and start collecting again.

The wave sometimes washes in obstacles like driftwood that you'll need to dodge as you scurry and dig for coins, but the seagulls can also drop obstacles of their own: bottles, which will block other gulls from running to safety, and bread slices, which will stick competing gulls in place for a few moments. The mad rush to safety as the wave takes over the beach is usually filled with jostling gulls attempting to block their opponent's path or get them stuck in place so they get poofed by the wave.

It's cute, and fun, and it can be extremely hectic, too, if your sprint meter is empty, the wave is at your heels, and some scheming gull sprints past and drops a hunk of bread in your path.

The result of a game jam, The Beach is currently in alpha. It could probably use an influx of players as there have only be a handful of other gulls around while I tried it out, and I'd really love to see a beach absolutely covered with scurrying gulls. You can find it here on Itch.io.