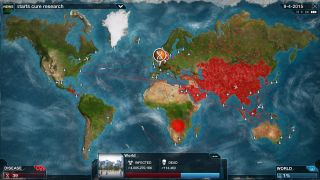 Plague Inc., the strategy sim where you create and nurture a pathogen in an attempt to destroy all the pesky humans, is now getting an anti-vaxxer scenario thanks to a Change.org petition.

Ndemic Creations noticed the petition last week, which wanted the developer to add anti-vaxxers as a buff. In Plague Inc. your pathogen has certain traits that makes it more or less effective in different situations and can, during the course of a game, evolve into a more powerful disease. But humanity can take lots of precautions, shutting down airports, giving out inoculations. Anti-vaxxers, then, would be a plague's best pal.

Instead of just adding a buff, Ndemic said it would add an anti-vaxxer scenario if the petition got to 10,000. It's currently sitting at just over 20,000.

Alright, alright! You spoke, we listened. Neurie's very happy to hear that we're going to start figuring out anti-vaxxers soon. He's dying to try and get inside their heads. https://t.co/fYq09awgJc pic.twitter.com/Sof0aJE0ywFebruary 26, 2019

Plague Inc was ported to PC as Plague Inc: Evolved, and hopefully we'll see the anti-vaxxers infecting our version of the game, too. It also supports user-created scenarios, so if we don't get the official one, maybe a diligent modder will work their magic.

Previous scenarios have tackled other serious issues like Brexit and vampires.