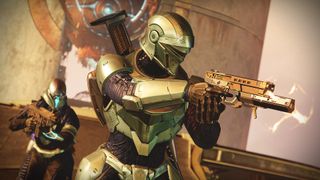 Update (9:45 pm ET): Bungie has confirmed that rollback for player accounts is complete, and that the game will be back online at 7 PM PST (10 pm ET).

Update (6:30 pm ET): Bungie has shared more information about the upcoming fix, which will see all player accounts rolled back to the state they were in at around 8:30 am PT/11:30 pm ET on January 28.

We’re continuing to work on player account rollbacks and estimate that Destiny 2 will be brought back online at 7 PM Pacific. For more details please see: https://t.co/5a0k5Ysn21Stay tuned for more updates. https://t.co/PBq4PUcvIiJanuary 29, 2020

Destiny 2 update 2.7.1 rolled out a little earlier today, making the usual sort of tweaks, bug fixes, and miscellaneous changes that come in hotfixes—it improved performance in the Chamber of Suffering part of the Pit of Heresy dungeon, for instance, and added a fix for a bug that was enabling Sunbreaker Titans to gain stacks of Roaring Flame by destroying Telesto projectiles. The full patch notes are here, if you want to dig down into it.

But it's also apparently doing more than just that. A seemingly substantial number of players are reporting on Reddit (here, and here, or this whole thing here, just to get you started) and Twitter that after the maintenance period ended, their glimmer, ascendant shards, enhancement prisms, and other materials were missing.

Not all players are affected by the issue—our own Tim Clark dodged the bullet, although one of his guardian pals wasn't so lucky—and at this point there's no indication of a possible cause, but it does seem widespread. Based on reports, it appears that players impacted by the issue have lost all their glimmer, but varying amounts of other materials.

Bungie has acknowledged that something untoward appears to be happening, and is now investigating. A rep said updates will be shared as soon as they're available—we'll keep you posted.

We’re currently investigating an issue where players may have lost their Glimmer and/or various infusion materials after Update 4.7.1 went live.Please standby for updates.January 28, 2020