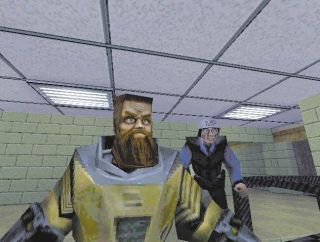 While we’re reminiscing about Half-Life for its 20th anniversary, let’s take a moment to celebrate its iconic protagonist. You all know him, of course. His unkempt beard, those wild eyes, that flattop haircut that just screamed, “I was in the military but they kicked me out because I was too awesome”. Yes, Ivan the Space Biker had a timeless look that served him well for the five minutes he was Half-Life’s hero. Then wee Gordon Freeman nicked his job.

The first time I saw Half-Life in 1998, Gordie had already made himself comfortable in the role, but only a year before, it was Ivan the Space Biker’s job to show off Valve’s fancy FPS (thanks for the reminder, Combine Overwiki). He sported a bulky space suit, some glorious facial topiary and generally looked like he had seen some shit. And then smoked it.

Ivan was used in early tests and promotional material before Valve had really settled on a protagonist. The original concept for Ivan was a beardy computer programmer in a bulky environmental suit, but when it came to actually designing him, the concept was tossed aside and he became this burly lumberjack-looking dude.

Big macho Ivan turned out to be a bit too conventional of a video game protagonist for Valve, which wanted a more cerebral hero. Sadly, after all the work he did promoting the game, Ivan was thrown in the bin and the gig was given to Gordo instead. He had glasses and a little beard, so you knew he was pretty smart.

Bring Ivan back for Half-Life 3.