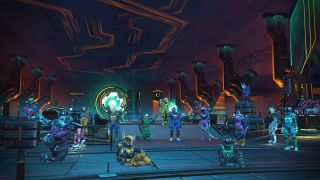 No Man's Sky Beyond launched yesterday, and while some astronauts have been socialising in space and playing in VR for the first time, others have been getting booted out before they get to the good stuff. A new update, released today, aims to tackle some of these stability issues. It was tested on the experimental branch last night, but it's now live for everyone on PC.

Most of the bug fixes tackle crashes, including rendering, memory and VR-related issues. One of the main problem areas, the Space Anomaly that houses the Nexus, should also be less likely to cause your game to crash. I've not been able to spend more than 30 seconds in the Nexus before No Man's Sky freezes and dies, so I'm looking forward to finally doing whatever it is I can do in there.