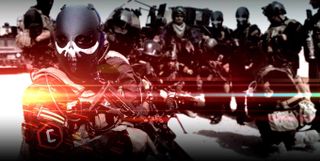 Eugen Systems has unveiled the third and final faction in the upcoming RTS Act of Aggression, the private military company known as the Cartel. The Cartel has access to the most advanced technology on the planet, but is more resource-dependent than the US Army and Chimera, and more difficult to play.

The Cartel tech tree will progress through two tiers, PMC, representing its legal front, and Black Ops, which covers its shadier operations. Its bases are major consumers of aluminum, while Cartel units require cash for their operational capabilities, but it can field soldiers to cover just about any role and has access to cutting-edge prototype technology, including stealth tech that can camouflage both units and buildings.

Eugen Systems also released a major update to the game today that adds a smooth zoom-out function, mouse wheel support, a new Free For All game mode, player status indicators in the chat window, and the addition of the Cartel army and AI in all difficulty levels. There are some known issues with the update, however, including improperly displaying Terminators and performance issues when the view is fully zoomed out.

Act of Aggression is set to launch on September 2, but immediate access to the beta is available in exchange for a preorder.