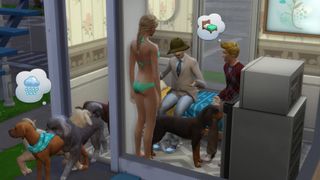 I've never been much of a builder in The Sims 4. I'm more of a buyer. But the new Tiny Living stuff pack has me interested in actually trying to build a house instead of just moving into one. I like the idea of making combined-use rooms and keeping a small footprint instead of using money cheats to buy sprawling mansions and filling them with expensive junk. So, I whip up a new Sim that looks like a skinny magician, and start making him a tiny house.

There are a few pre-made and furnished Tiny Living rooms in the pack, so I choose the smallest, a bathroom, and set about modifying it. I take out the bathtub and install a shower, though that doesn't really save any room since the shower's entrance still takes up the same amount of floor space. More productively, I take out some shelves and install a wall-mounted TV. It takes a few tries for him to get the concept, but now my magician can poop while satisfying his lust for entertainment. Just like that, I'm killing two birds with one stone.

Naturally, a crowd of nosy neighbors has already shown up with food and the pressing desire to talk about phones, compact discs, and cupcakes. I'd really prefer if the welcome wagon could wait a few days for me to finish building my house before coming over for fruitcake and chit-chat, but since they're here I invite them in to my TV room/toilet.

It's crowded, sure. It's so cramped my magician actually walks outside so he can carry on a conversation with one of the neighbors through the window. But my tiny bathroom/den is a hit! Soon people are eating plates of fruitcake just inches from where I dump out. You can actually put a plate on the little shelf under the wall-mounted TV, and wash dishes in the bathroom sink. Turns out my toilet/den is also half a kitchen. I feel like I'm already crushing it at Tiny Living!

But I do need an actual kitchen, someplace to cook, plus something to sleep on (it doesn't look like I can nap on the toilet), so I add a second level onto my tiny house, planning for a bedroom/kitchen combo. I plop a room the same size as the bathroom on the roof, add a set of stairs leading to the door, cram a single bed along the wall, and then drop in a mini-fridge from the Discover University expansion (Tiny Living, disappointingly, doesn't have any cool tiny kitchen appliances).

I put a microwave on top of the fridge, slap on some wallpaper and a few windows, and I've got my second multipurpose room before the bathroom fruitcake party has even ended.

Unfortunately, construction goes a bit awry after that. I attempt to build a tiny pool on the third floor, which results in simply flooding my second floor bedroom/kitchen with water, so I need to completely refurnish it. I can't seem to figure out how to use modular stairs, leading to my Sim briefly getting trapped in the bathroom because he can't open the door with the stairs in the way. And when I do add my third floor, I get a little too ambitious, trying to make it a triple-purpose room: an office/dining room/changing room.

There's so much stuff in there that none of it can actually be used. And there's not even enough room for my Sim to have a complete thought: while complaining that he can't find a path to the chair, his thought bubble actually sticks through the wall. I think I'll have to take out the tiny desk and one tiny chair.

I spend a while messing with stairs but still can't get them to conform to my desires. I was envisioning a staircase winding up around the house to each level, but I can't quite make that work, so I settle on a separate set of stairs going to each floor. Which means if my magician wants to make a meal, he first climbs up to the second floor bedroom/kitchen, nukes it in the microwave, then walks back down the stairs to ground level and takes the other stairs up to the third floor dining table, then heads all the way back downstairs to the ground floor bathroom/den to wash the dishes.

Something else that's not great for tiny homes? A shitload of stray dogs.

I designated my plot of land as a place where stray dogs sometimes visit, thinking it would be nice to see them wandering around in the comparatively large yard. But it turns out dogs are just as rude as the neighbors, continually barging into my home without being asked. There are packs of stray dogs just hanging out inside my tiny house all day and night. I mean, it's cute, but I don't exactly have room for all (or even one) of them.

Ah, well. As cramped and illogical and dog-filled as it is, I still kinda dig my new tiny tower. I eventually got rid of the dining room table and put in a desk with a laptop, since my Sim needs a place to work from home and can eat while sitting on his bed or standing in his bathroom.

It's obviously not ideal, and he's got some stomach problems from only eating microwaved food, and he spends most of his free time navigating the many, many staircases to reach his various multipurpose rooms filled with unknown dogs, but when you decide to go all-in on Tiny Living, you've gotta make a few compromises.