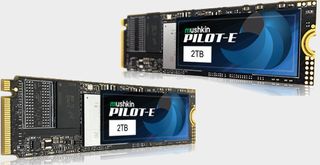 It's still early, but so far in 2020 we have not seen SSD pricing shoot up to any alarming degree. Providing more reason to be optimistic, Mushkin's new Pilot-E series has landed on Amazon at affordable price points.

It does not get a whole lot faster until navigating the handful of PCIe 4.0 SSDs on the market, and for those drives, you need an X570 motherboard to take full advantage of their capabilities.

I'm happy to see Mushkin come out of the gate with relative aggressive pricing. Just a few weeks ago, multiple reports surfaced saying SSD pricing could shoot up this year due to rising costs of NAND flash memory chips. A power outage at one of Samsung's plants only added to the speculation.

It could still happen, but hasn't so far. I also think these new Mushkin drives are a good sign of what to expect—not much in terms of price movement, which is a good thing.

I imagine the 1TB model will be in stock soon, and probably priced somewhere around $149. Meanwhile, the other two are all available now. All three are backed by a three-year warranty.