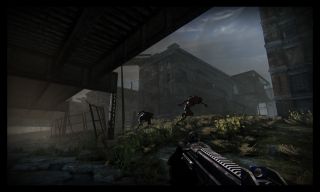 The few times I've been to Chicago, I never found myself having to fend off a teleporting, altered human monstrosity using only a machete. I had to zip my jacket up all the way on Michigan Avenue because the early morning breeze is pretty brutal, but it's hard to compare my hardships to those players will face in Phosphor Games' Windy City-inspired survival sandbox, Nether. Along with hunger, persistent injuries, and supernatural monsters, this new entry into the "DayZ-alike" sub-genre will put you in constant danger of running into any one of 63 other players per server who may or may want to take your stuff. Using guns.

What immediately sets Nether apart from the likes of DayZ and Infestation: Survivor Stories is the terrain. You'll be exploring a predominantly urban environment with very little green space to speak of. Not only does it sprawl for miles in every direction, but a majority of the buildings have fully-modeled interiors, and some are over a dozen stories high. Every time you turn a corner, you're potentially putting yourself in line-of-sight of half a hundred sniping spots, which ratchets up the player-related tension to new heights.

Nether will also feature world objectives like you might see in Rift or Guild Wars 2, most of which will require player cooperation to complete. The one we got a look at, and you can see in the trailer above, involves reactivating a pair of emitters that will turn an enclosed area into a monster-spawn-free safe zone. The machines are quite loud, which means they'll attract bad guys, which means you'll need capable friends to cover you while you complete the objective. Once the safe zone is secured, you'll gain access to NPC vendors and an access point for your global inventory.

The death penalty in Nether is just as steep as its predecessors—you lose all of your stuff and spawn somewhere else. However, survivors in Nether also have experience and skills which persist through death, which can do things like increase your damage and make your targeting reticule more accurate with certain weapons. The current plan is to have some sort of mechanic to prevent players from Alt-F4ing out of a bad situation, and to preserve a player's in-game position when switching between servers.

Speaking of servers, Nether will support both public and private dedicated servers, and server modifiers will become available in the future. Some custom settings options that the devs discussed allowing you to customize included third-person view (which was removed due to community feedback) and a no-monsters mode dubbed " The Road simulator." Phosphor will launch the game sometime late this fall, and it will be available as a single purchase with different levels of early access, the details of which are still undecided. Microtransactions are being considered, but they will be convenience items—no guns, special ammo, or invincible, three-headed attack dogs.

For more, keep an eye on the official site .