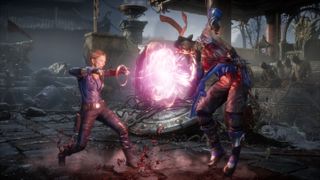 It appears that Mortal Kombat 11 has had most of its remaining roster revealed by way of leaked Steam achievements, last week.

The achievement list seems to confirm that Kung Lao, Cassie Cage, Frost, Kotal Kahn, Erron Black, Jacqu, and Jade—as well as a few new characters—will be joining the roster. While NetherRealm Studios has yet to confirm or deny last week's revelation, that hasn't stopped director Ed Boon from jumping on Twitter:

Hey Sonya... what are your thoughts on leaks?pic.twitter.com/DnruPv5knAFebruary 10, 2019

With the game set for release in April, we won't have to wait long to find out either way. Mortal Kombat 11 was first announced at the Game Awards last year, with more details revealed a few weeks ago via a live stream by developers NetherRealm. The reveal included both story and gameplay trailers, a fatalities montage trailer, as well as a look at character customisation options.

Mortal Kombat 11 is set for release on April 23.