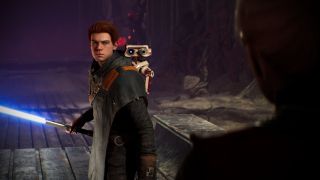 Star Wars Jedi: Fallen Order would have had a very different name and focus if Lucasfilm got its way when Respawn initially pitched the Force-powered action game. According to game director Stig Asmussen, the company had to be convinced to green-light a game about lightsabers and Jedi.

In a recent episode of the AIAS Game Maker's podcast, Asmussen chatted about the game's development and discussed the difficulties that stem from dealing with the people who control the universes' reins. Lucasfilm was protective, especially of the Jedi.

"I pitched, 'Hey what if we do a game about Jedi and Force powers,'" he recalled. "They were not super comfortable with that. They threw it back, 'What about blasters or bounty hunters?'"

It's a surprise, given that almost every game, TV show and movie puts some lightsaber-wielding do-gooder front and centre. For a while, it felt like everyone but Lucasfilm was interested in non-Jedi stuff, at least until Disney snatched it up and made the likes of Rogue One and The Mandalorian. It might explain, however, why the two previous attempts to make a brand new Star Wars game, both unfortunately shelved, were about rogues—bounty hunters and smugglers.

Asmussen didn't budge. "That's not the background of the team we've built; you might as well ask me and us to start building a racing game at this point. I don't think anybody's going to be really happy with the results of that."

With Lucasfilm wanting something entirely different, Asmussen had to win it over and fight for the opportunity to muck around with the Jedi.

"The Jedi is the Holy Grail. To make a game about Jedi you've got to earn it. There was a little bit of back and forth, but they could see where I was coming from and said, 'All right, we can start having a conversation about making a game about Force users, but not Jedi.' And then the game comes out and its name is Jedi."

While it wasn't the end of the disagreements about Respawn's vision for the game, the studio did at least get to throw in loads of lightsabers, even letting players make their own. A bounty hunter and blaster game made by Respawn sounds like something I'd be keen to play, but maybe Lucasfilm will be able to talk the next developer working on Star Wars to leave the Jedi alone for once.