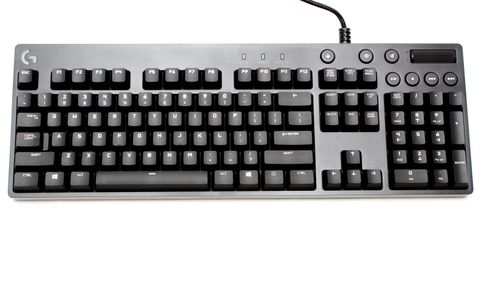 An outstanding mechanical keyboard for both the gaming room and the office.

Logitech spent plenty of R&D time and money on its Romer-G switch, so it’s no surprise that it installs them only on its top-end boards. If you want the top-end looks without the top-end price tag, Logitech offers the G610 Orion, which features Cherry MX mechanical switches.

Logitech migrated the design of its G810 spectrum on to the G610. It’s an easy way to maintain image consistency across the lineup and is much more cost efficient for the manufacturer.

Not that we’re complaining; the Logitech G610 is built like a tank. Made from thick industrial-grade plastic, it should easily handle a beating. It doesn’t lose out on aesthetics appeal either. The matching matte finish on the chassis and the keys gives the entire board a streamlined look. Embedded proudly on the top left is Logitech’s logo and yes, it does light up.

The G610 not only inherits the looks of the G810, but also its feature set. A row of dedicated media control keys can be found right above the number pad along with the superb volume control scroll wheel. The tri-level elevator feet is aided by enormous rubber pads to seat the keyboard firmly on your desk. The windows key can also be swiftly disabled by toggling the “gaming mode” button.

Although G610 doesn’t feature N-Key Roll Over (it has an ample 26-key roll over), it features 106-key anti-ghosting which protects against incorrect or missing key signals when more than one key is pressed. The 26-key rollover protection is more than enough, since users generally only come with ten fingers. On the topic of keys, even though the keycaps on the G610 aren’t the greatest, they should still hold up to abuse fairly well.

The Logitech Gaming Software presents users with a clean, easy to follow interface. A fully-featured macro manager lets users bind custom macros to the function keys. Like we said earlier, only a few lighting effects are available to the G610. Users can adjust the LED’s brightness levels and change its pattern between wave, star, and keystrokes.

With all the curves comes all the edges. The glossy, fingerprint-loving bezel makes a return on the G610. Like its predecessor, the G61 does not have a USB pass through. Also absent is the dedicated G-key column of programmable macros; it has been merged with the function row instead.

While the G610 does have backlighting, it’s restricted to white. The lighting pattern can be changed between a handful of presets. Because Cherry MX switches have their LEDs mounted off-center next to the stem, the key lettering must also be displaced to sit on top of the LEDs. This leads to some awkwardly proportioned prints, namely the Shift keys.

None of these are deal-breakers for most users and can be easily overlooked once you factor in the price. Since the G610 Orion Red omits Logitech’s proprietary Romer-G switch, its price is much more palatable for the general consumer. Coming in at just $120, its fantastic build quality and excellent performance more than compensate for its shortcomings. As it stands, there’s almost no better entry point for users looking to step up to a premium gaming keyboard or a more dependable office companion.

An outstanding mechanical keyboard for both the gaming room and the office.