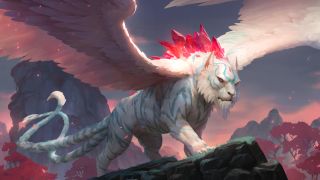 The Legends of Runeterra Ephemeral tutorial (Spirits High and Low) introduces you to units with a specific ability, and coaches you on how to use them to deplete the enemy Nexus’ health. Ephemeral units die after they’ve attacked an enemy unit, or when the round ends.

Make the most of units with the Ephemeral keyword by choosing other cards that can benefit from them dying. Last Breath features heavily in this tutorial as it’s an effect that activates when a unit dies and synergises harmoniously with Ephemeral. So here's a guide for every section in the Legends of Runeterra Ephemeral tutorial as you deepen your understanding of just how powerful these cards can be.

Legends of Runeterra Ephemeral tutorial: how to beat it

When ‘Your Action’ appears on screen, drag all five units onto the board. Position all three Shadow Fiends on the left side and the two Caustic Casks on the right. Click ‘Attack’ and wait for your opponent to play their units: Inspiring Mentor and Scaled Snapper. When ‘Your Action’ displays again, click ‘OK’. Both of your opponent’s units trade into Shadow Fiends on your far left, so your final Shadow Fiend will deal direct damage, leaving the enemy Nexus at 1 health.

Now your opponent passes their turn. End the round and watch your remaining Caustic Casks die and finish off the enemy Nexus with their Last Breath effects.

This section of the tutorial starts your Nexus at 18 health and your enemy’s at just 1. You have a Cursed Keeper unit that cannot block with a Last Breath effect that summons an Escaped Abomination. You also have two spells in hand: Mark of the Isles and Relentless Pursuit. Your opponent only has a 3/3 Jeweled Protector.

Play Mark of the Isles and drag its beam to your ally to give it +3/+3 and Ephemeral. Drag your buffed 4/4 unit onto the board to play it and click ‘Attack’. Your opponent will play their unit so click ‘OK’ and watch them attack each other.

An Escaped Abomination appears in your hand for the next round, but you cannot use it yet. Play Relentless Pursuit and click ‘OK’ so you can attack next. Your opponent has nothing to play, so their turn is skipped. Play your only unit and attack to decimate the enemy Nexus.

The enemy may have a Nexus with higher health and some bulky units here, but you still have all the tools to win. You already have a 1/1 Hapless Aristocrat on your side. It’s Last Breath effect will produce a Spiderling which will be useful further down the line. It’s important to summon Phantom Prankster now in preparation for what's ahead. This unit deals 1 damage to the enemy Nexus when another ally dies.

Your opponent passes their turn, so let’s cast a spell. Play Haunted Relic and click ‘OK’ to summon three Unleashed Spirits. The board looks a lot busier now. Your opponent passes their turn which leaves you an opportunity to play Ravenous Butcher. You can only play this card if you kill an ally, so select Hapless Aristocrat as its target. You may have lost a 1/1 unit, but thanks to its Last Breath effect, you gain a 1/1 Spiderling; a worthwhile trade.

Your opponent skips their turn once more: now to do some damage. Play Ravenous Butcher first, followed by three Unleashed Spirits and Spiderling. Click ‘Attack’, watch as your opponent plays their units, and then initiate to watch the battle unfold. Your units plow into your foe, and as they die, Phantom Prankster chips away at the enemy Nexus. Congrats, you’ve completed the Ephemeral tutorial.